Captain’s Corner has announced a huge guest for Legends of the Ring XXVI: 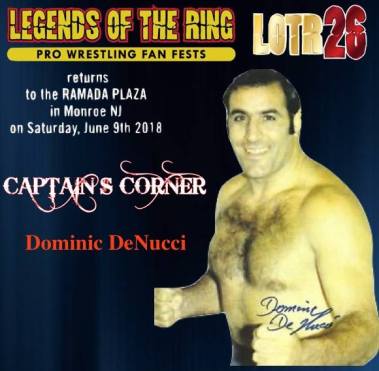 I want to thank everyone who guessed what Former MULTIPLE time WWF/E Tag champion will be appearing at Legends of the Ring on June 9th courtesy of Captains Corner….well wait no longer.

Dominic DeNucci will be making a RARE appearance in Monroe NJ on June 9th!

Dominic held the Tag belts with Victor Rivera, Pat Barrett and Dino Bravo in the 70’s. He’s also known for training both “The Franchise” Shane Douglas and Mick Foley.

Presale will be up next week, don’t miss out on this rare appearance!