Skip to content
Search
Close
It came down to the wire.

I knew months in advance that work would threaten my attendance to the Big Event 17. I couldn’t risk pre-ordering a $20 admission ticket let alone any vendor guests and, if you know me well, I am always #TeamPreOrder. Give me 3-5 months to spread the wealth around and, BAM, that’s how I can afford to get 20-25 guests.

I didn’t have that luxury this time.

The probability of my attendance was 50/50 on Thursday evening but, thankfully, I was given the go-ahead on Friday morning. This would be a new experience for me: limited funds, passing on names I’d like to get, and tackling this solo. Let’s see how I did.

Quick shoutout to a reader of the blog! We met by the Wippleman line and you told me your name but, sadly, I couldn’t really hear it over all the noise! Either way, great to meet you bud and, YES, I WILL DO A BIG EVENT 18 PRE-ORDER PAGE!
I woke up at 7 AM to my alarm clock and loud, loud banging. Long story short: some crazy dude was trying to break into his girlfriend’s apartment across the street. The dude was mule kicking the door, banging his head against the door, and screaming at the top of his lungs. It was scary.
The police came quickly, though I’m not sure what the outcome was.

Jenna stayed home while I made the long public transportation trip to the LaGuardia Plaza Hotel. This trip was more involved than I expected: bus ride to the George Washington Bridge bus station (175th St.) –> Downtown A express to Penn Station –> LIRR to Woodside –> Cheap Lyft to the hotel. Ultimately, it wasn’t that bad but it definitely made me appreciate Jenna that much more.

I arrived just after 9:40 AM and immediately hopped on a fairly long line of people lined up outside the hotel. It was FREEZING and it absolutely sucks having to wait outdoors in the freezing cold but, as I understand it, the hotel does not want people waiting in the lobby. The line was a mix of people who pre-ordered and those who were buying tickets day-of. This was a slight departure from the March show as they had a seperate line for pre-orders and alternated between pre-orders/day of.

We were allowed into the building by 10:20ish and I purchased my $20 GA ticket about 10-15 minutes later. I immediately spotted fellow board member Anthony18 and we exchanged hellos. 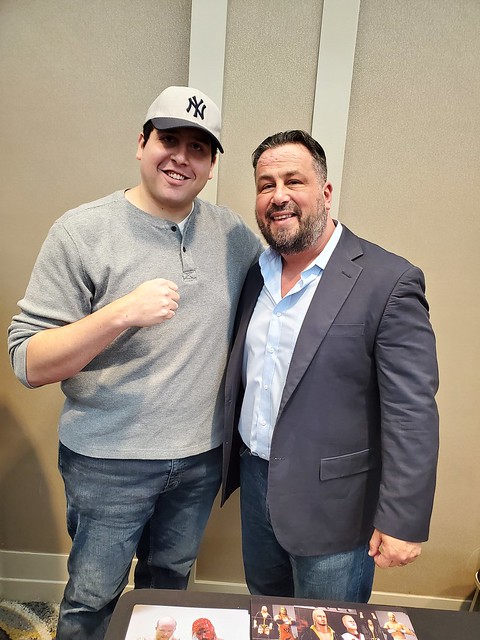 I headed into the main vendor room and spotted my main want of the day: Steve Corino. ECW will always have a special place in my heart and “The King of Old School” was a favorite of mine. His combo price was $40 (which is about $10 too high, IMO) but I wasn’t thrilled with the 8×10 selection (and didn’t have a personal item for him to sign) so I decided to get a photo op for $20. He was very nice and seemed happy to be there. 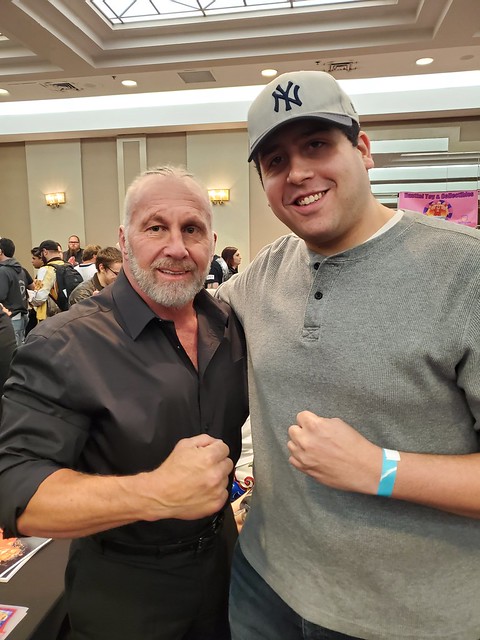 Chris Walker was up next and I decided to bite on the $20 or $30 combo. Walker sat stoned face in his chair but was actually pretty personable when I approached him. We made fun of the condition of my precious Encyclopedia, which really needs to be repaired soon. I’m actually looking into that as we speak. Anyways, Walker is a rare name to the Encyclopedia that I’m happy to add. 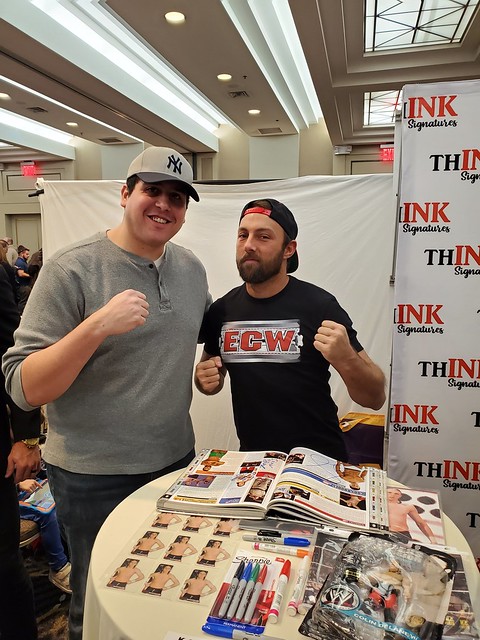 Next was Colin Delaney who was a $20 combo. He was really friendly and someone I’ve wanted to meet for a while now. He signed my Encyclopedia. Minor rant: there were two people (who are vendors though I’m not sure they brought anyone to this show) standing in front of Delaney. Naturally, I approached them and told them I wanted a Delaney combo and there response was “….okay?” I realized that they weren’t Delaney’s handler and, geez sorry that I mistook you for being his handler. You were only standing right in front of his table. Sigh. End rant. 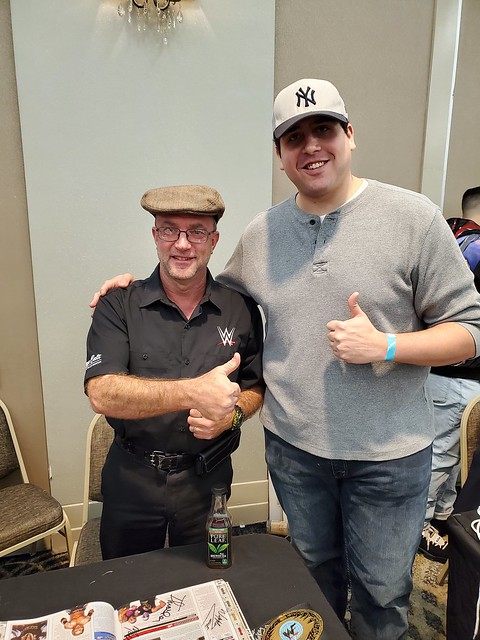 I wandered around for a bit before venturing back into the crowded vendor room. I decided to get Harvey Wippleman, another rare name. He was a very reasonable $30 combo, which surprised me a bit. Polite guy. He signed my Encyclopedia. 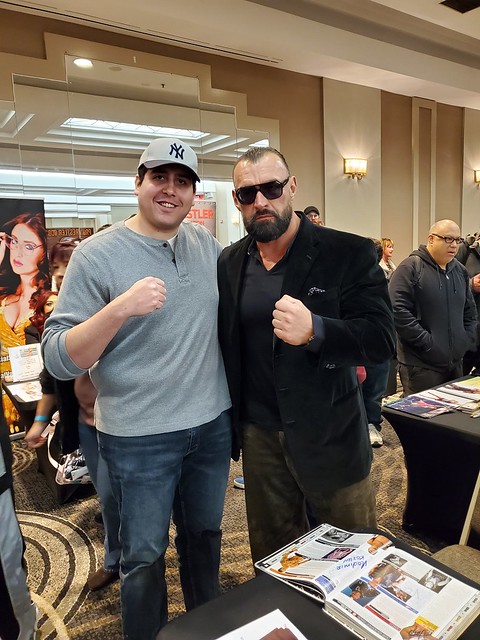 Wrapping up my Encyclopedia for the day was Vladimir Kozlov. He was a pricey $40 combo but, again, he’s a guy who hasn’t been around and I didn’t want to pass on adding his name to the Encyclopedia. 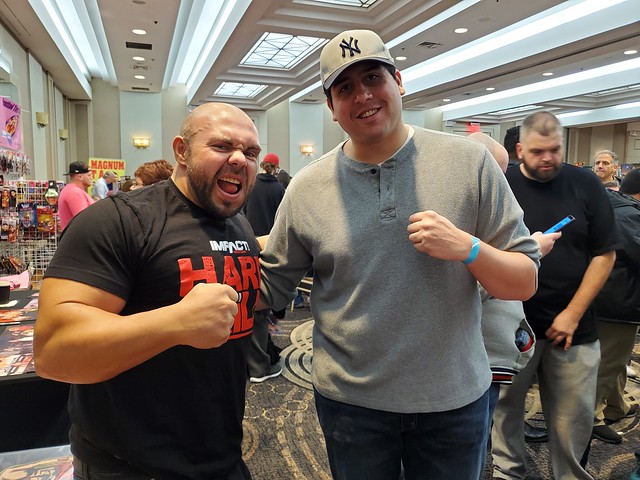 I decided to get Michael Elgin. I don’t mean to sound cryptic but I did encounter an issue with one of the handlers for Gimmick Tree/Conor Promotions that I’m hoping is resolved. If not, I’ll be glad to share the details with all of you. Elgin himself was nice and signed my ROH Global Wars program. Zero issue with Elgin. 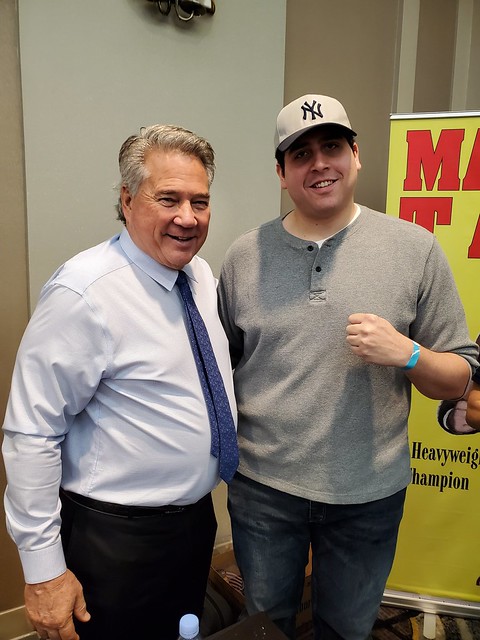 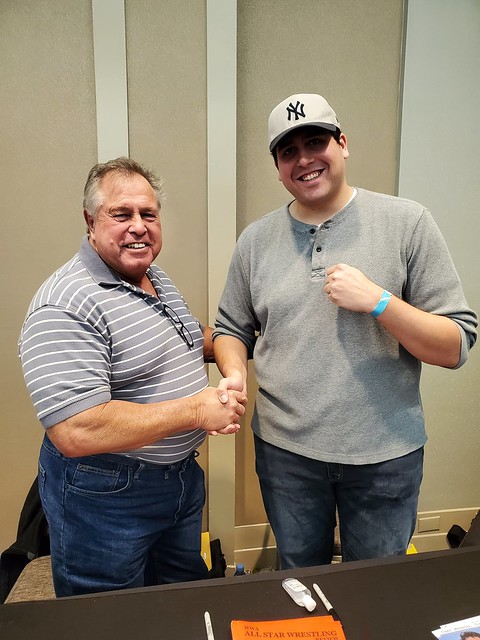 I stopped by the GW Promotions table and was stunned to see that Mike George and Steve Olsonoski were $35 combos. I wanted both but had a hard time justifying $70 on two relatively obscure names so I settled for photo ops. Both were really nice and Olsonsoki commented on my height (which I always like haha).

And that was that. I definitely passed on a lot of names I normally would’ve gotten if I had months to pre-order. Some of those names:

I also thought some of the prices were flat-out absurd. I mentioned George and Olsonoski but Nick Aldis was a $50 combo ($30 Photo Op), Paige Van Zant $75 combo ($50 photo op), Teal Piper $30 combo, and plenty of others that I’m forgetting. It appears the days of $20-$25 combos are dead. For shame. 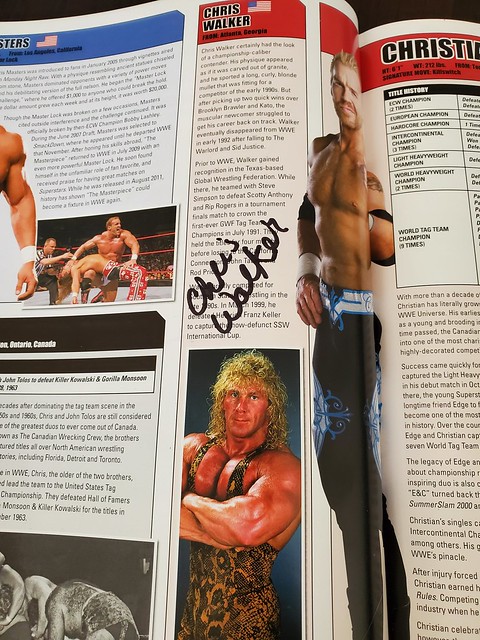 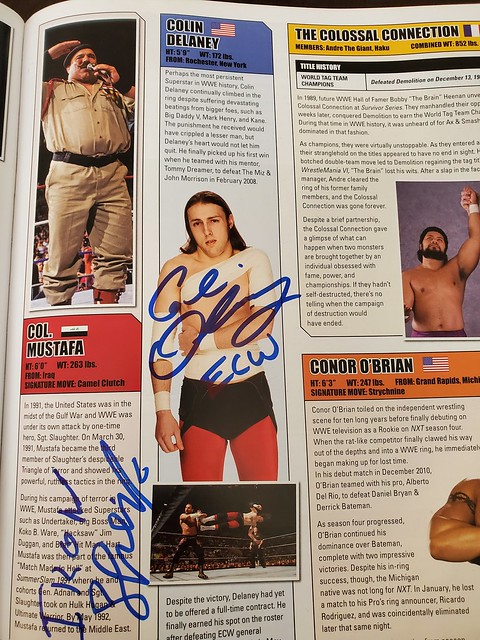 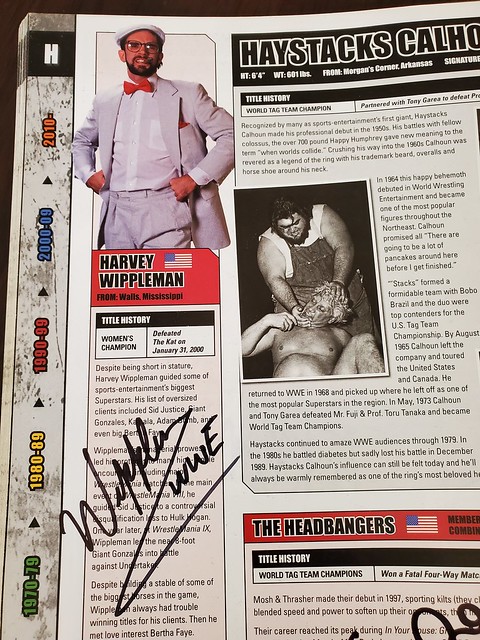 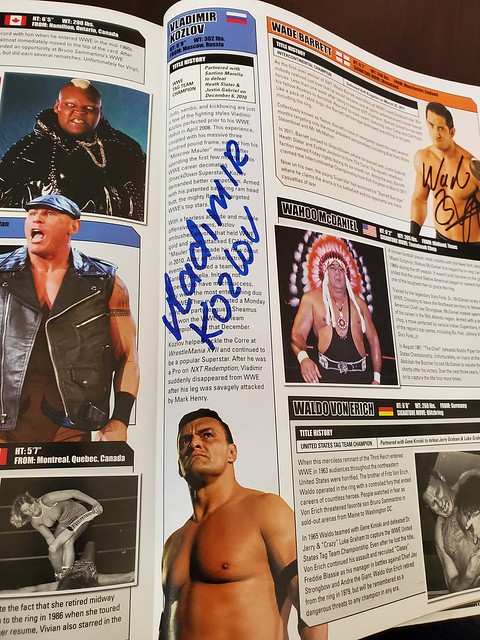 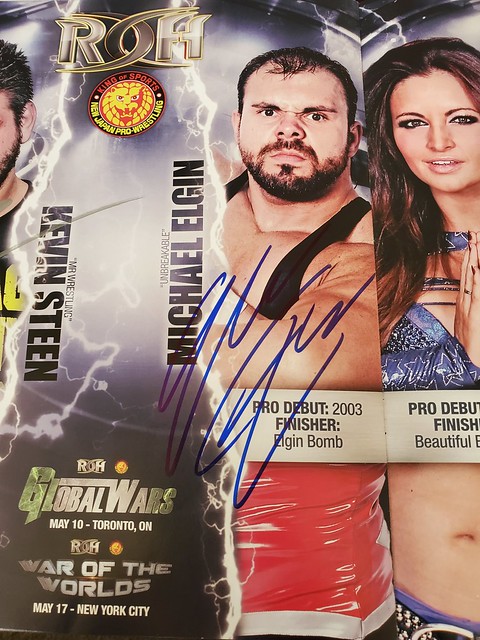