This is how a convention should be: a solid guest list, spacious venue with FREE parking, and an absolute breeze to get through. My wants for the day were fairly limited but I’m thrilled with how everything turned out. Let’s get to it:

I arrived at Terrace on the Park just before 11:30 AM. Jenna offered to drive me as I planned on getting my NXT Takeover III chair signed by Athena, though she opted to wait in the car while I did my thing. She’s the best. We immediately found a great parking spot, I picked up my ticket in the lobby with ease (no line!!!) and was directed to the elevators to access the ballroom. Everyone’s been saying it and it bears repeating: this should the permanent home of Big Event. It was spacious, clean, and I never once felt suffocated by the crowd. I hope they run it again. 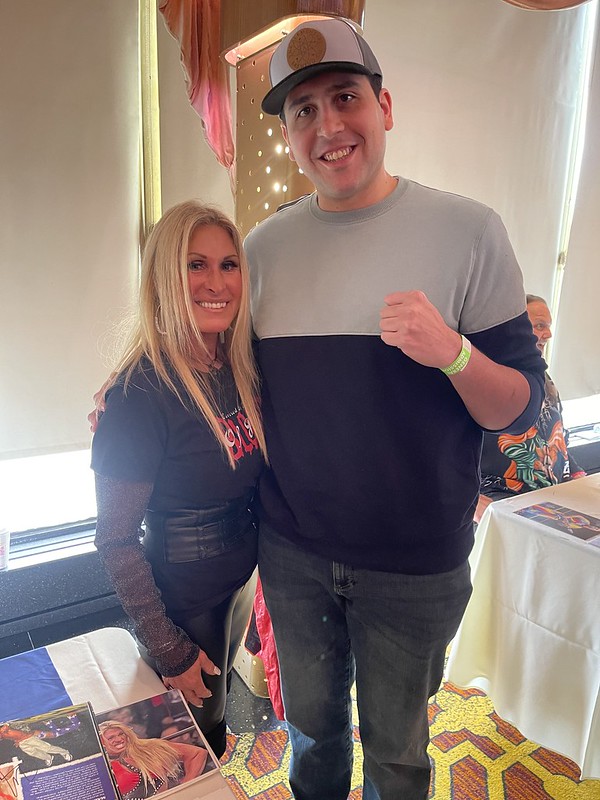 I spotted my first pre-order of the day: Asya of WCW fame, a rare guest that hasn’t done an appearance in my neck of the woods since I started this hobby (not that I’m aware of, anyway). I chatted on the line with Kevin from Damage365 Promotions and a couple of other people while a friendly fan (and reader of my reports!) had a bunch of things for Asya to sign. I just realized that I didn’t catch his name so, buddy, if you’re reading this please comment with your name and definitely say hello at the next show! Asya was very nice and signed my WCW: The Official Annual, which got a few compliments from people. The first name was in the books. 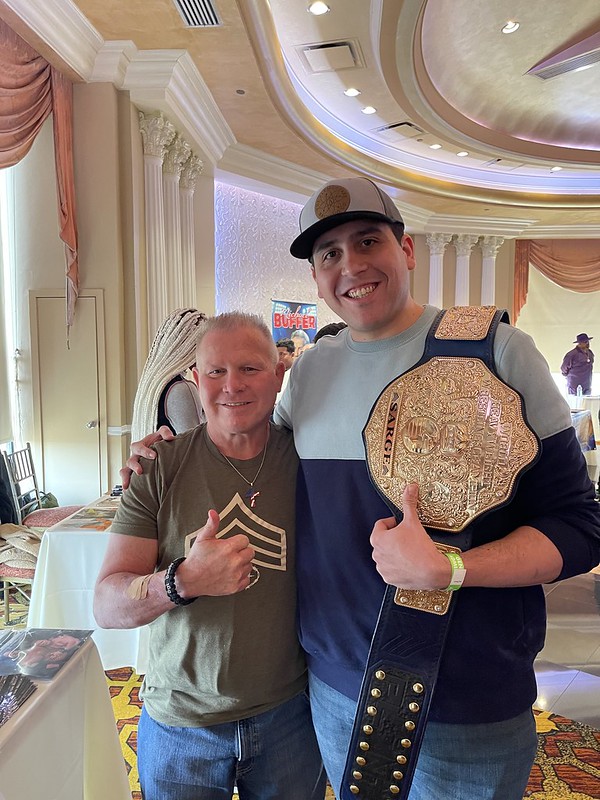 Next was another rare WCW name: “Sarge” Buddy Lee Parker! I was thrilled that he actually made it to this event. He was very nice and loved my WCW Ultimate Superstar Guide. While he wasn’t a featured profile in the book, there’s a “Training” profile that features a great shot of him instructing Chuck Palumbo and Mark Jindrak at the Powerplant, which he really liked. They also had a replica WCW Title to pose with, which I dug. 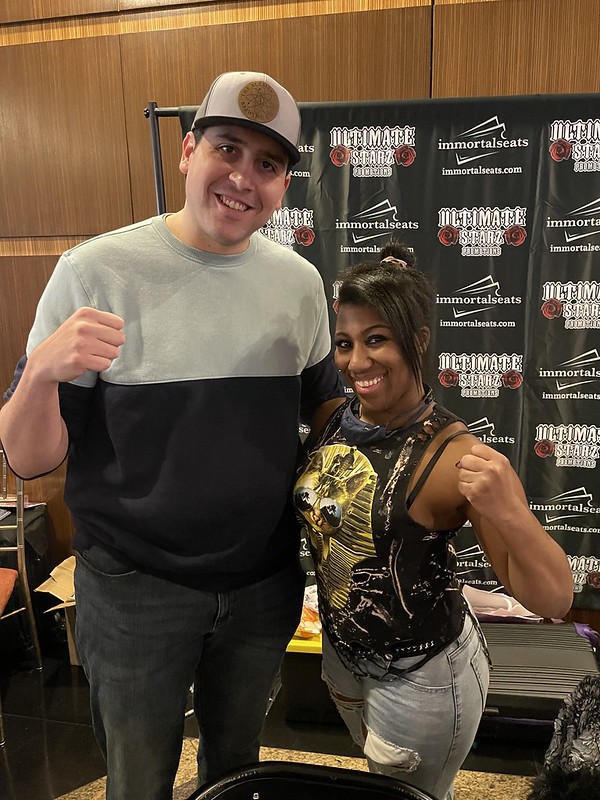 I ran down to grab the chair from Jenna’s car, ran back up, and hopped on Athena’s line…before I realized I left my paint pen in the car. D’oh. I had to run back down, grab the pen, and re-joined her healthy line (and I also witnessed an incident that I’ll talk about at the end of the post). I eventually got up to Athena and she was as nice as could be! She first signed the match card from NXT Takeover II (her debut vs. Billie Kay) and commented how much she loved it. She then signed my chair, which came out great. I was a little nervous she wouldn’t sign as Ember Moon since some ex-WWE talent say they can’t sign under their old gimmicks but I was assured she would and I’m glad it worked out.

I ran back down to the car to dump my chair before knocking out one more pre-order name: Buff Bagwell, who was the admission guest for the event. Buff was walking with the aid of a crutch and he just recently revealed that he’s moving in with DDP to get help, which is a great thing to hear. Fun story: WOODMO and Ira were in front of me on line and Buff was suppppeeerrrr hesitant to sign his poster in the spot WOODMO wanted but it eventually worked out lol. Anyways, I had Buff sign my WCW Ultimate Guide and he loved the picture of him delivering a flawless dropkick to Vampiro. He signed that pic and then signed his picture in the profile, which was really cool. All the best to Buff. 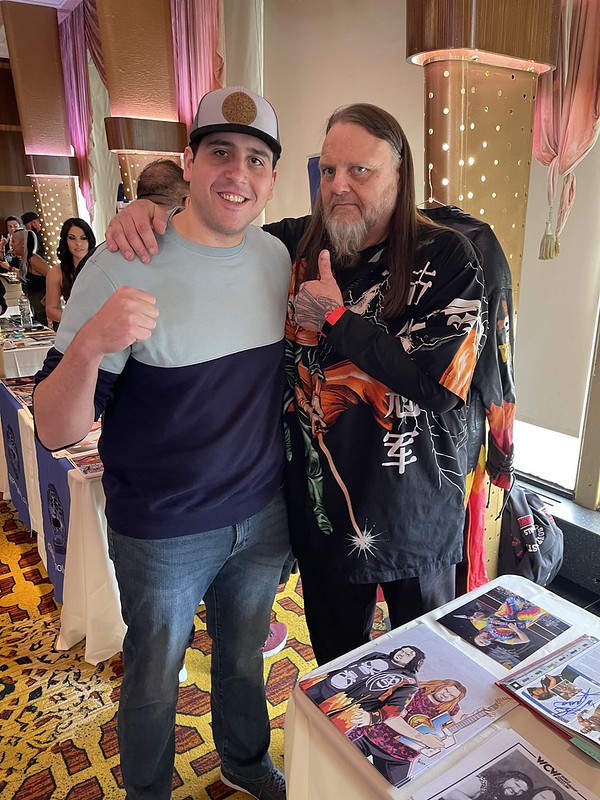 It was time for a few day-of wants and up first was a rare name: Maxx Payne, also known as Man Mountain Rock in the WWF! He was incredibly nice and seemed to really be enjoying himself. He signed his entry in my REVITALIZED Encyclopedia, baby! 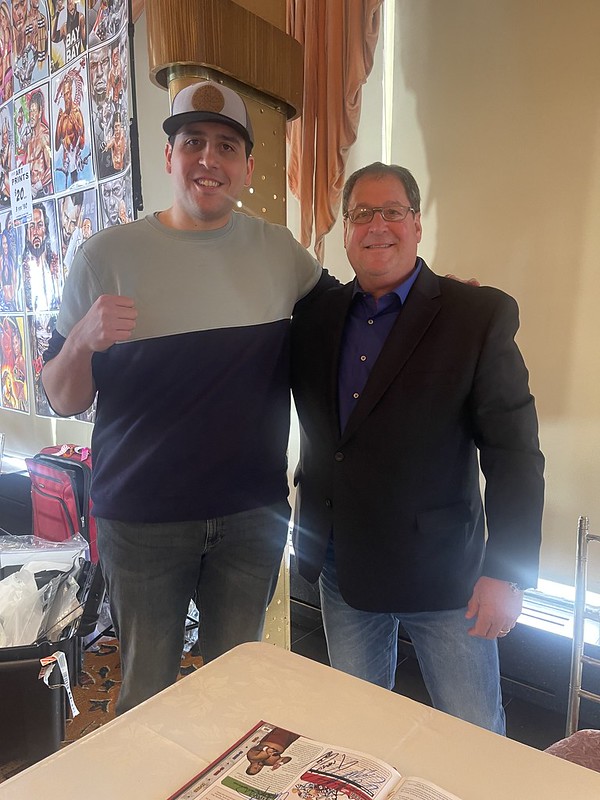 Next was former WWF ring announcer Tony Chimel, who was very nice. He signed his Encyclopedia and inscribed two dates: the year he started w/the WWF and how long he was a ring announcer. 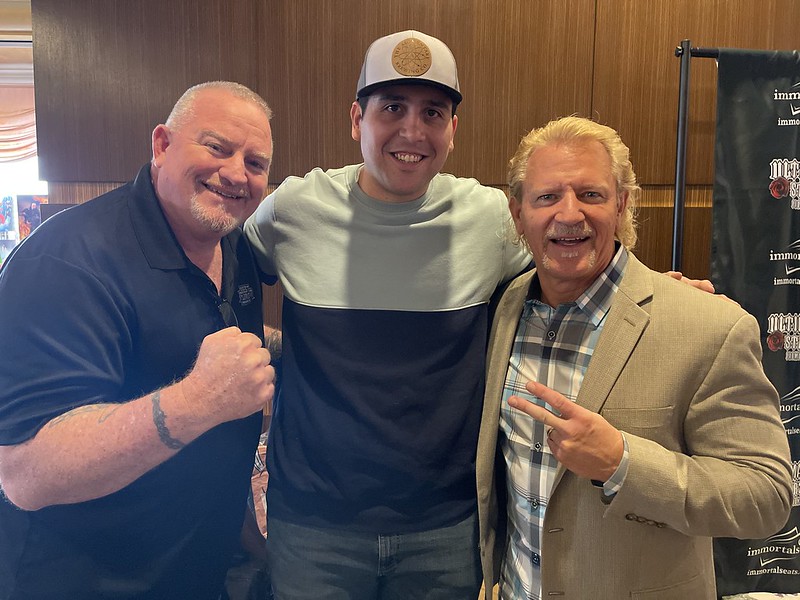 I decided to bite on the dual photo op pic of Jeff Jarrett and the Roadie. Roaddogg claims he remembers me from a previous event, which was cool. This was a unique photo op to get so I’m glad I bit the bullet. 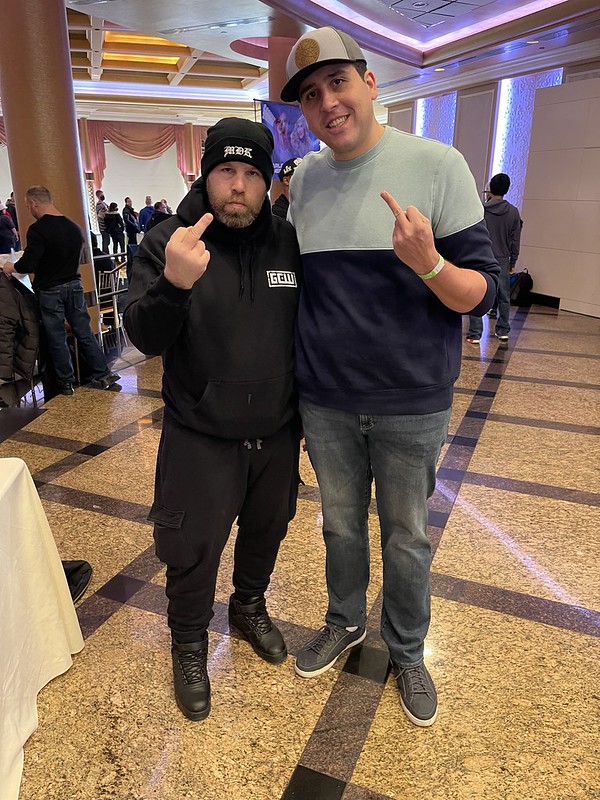 Finally: I met Nick fuckin’ Gage of GCW fame. I had Nick sign a really cool 8×10 that was taken during his entrance from his lone appearance on Dynamite vs. Chris Jericho.

And that’s that! Let’s talk about the incident I mentioned earlier:
So I get off the elevator and I immediately hear a familiar voice screaming their head off. I walk toward the ballroom and, sure enough, a woman wearing a Big Event t-shirt is shouting at the top of her lungs at a line of people. She was so hysterical that I couldn’t really make out what she said other than demanding “respect” and I think she was threatening to kick people out of the venue if they didn’t behave (though, again, it was difficult to make out what she was saying because she was that angry). I realized that this was the same woman who screamed her head off the last time the Undertaker was brought in (at the LaGuardia Plaza hotel)!. As I was on my way back downstairs, someone had pulled her aside and was telling her, “I appreciate that you’re trying to help but you cannot be screaming like this!” She replied, “But I’m not going to let people disrespect me” but the guy who pulled her aside wasn’t having it. 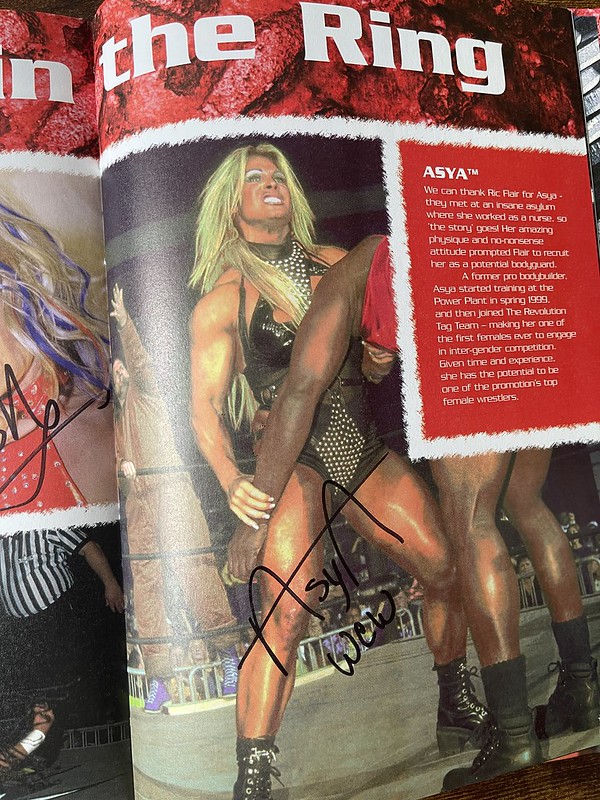 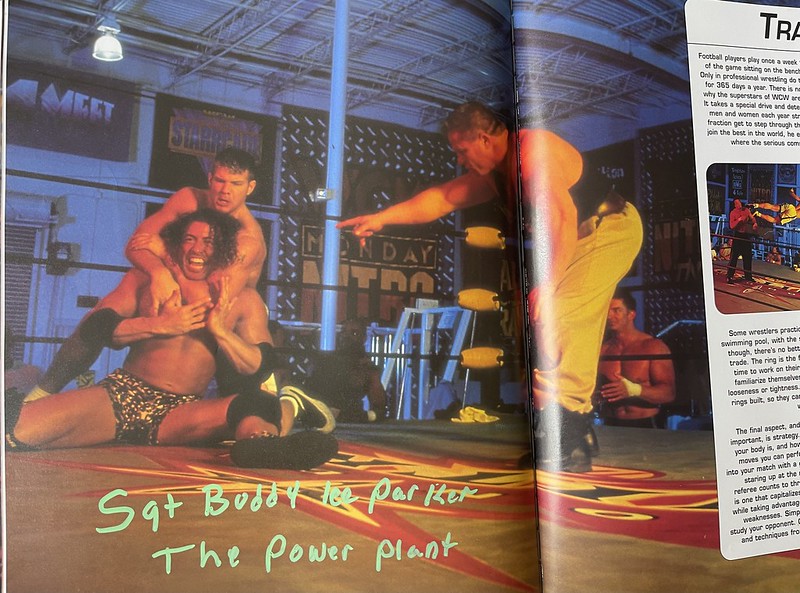 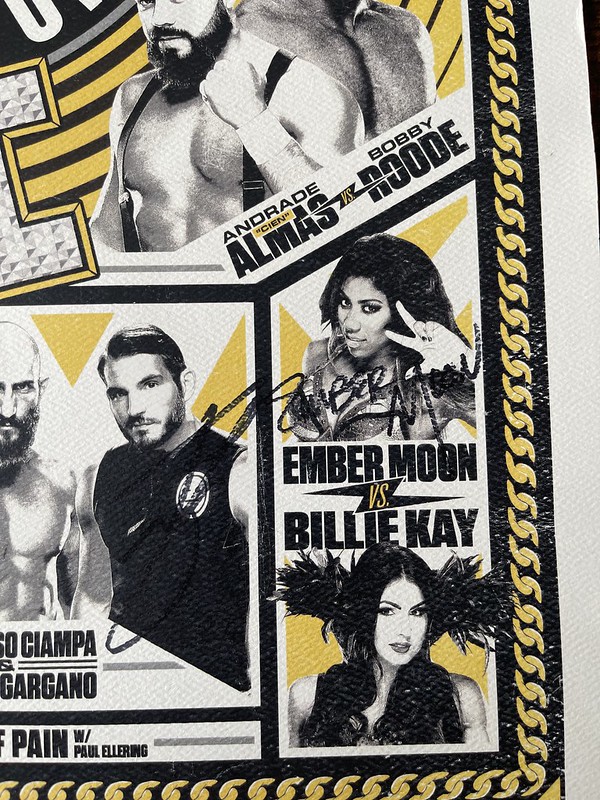 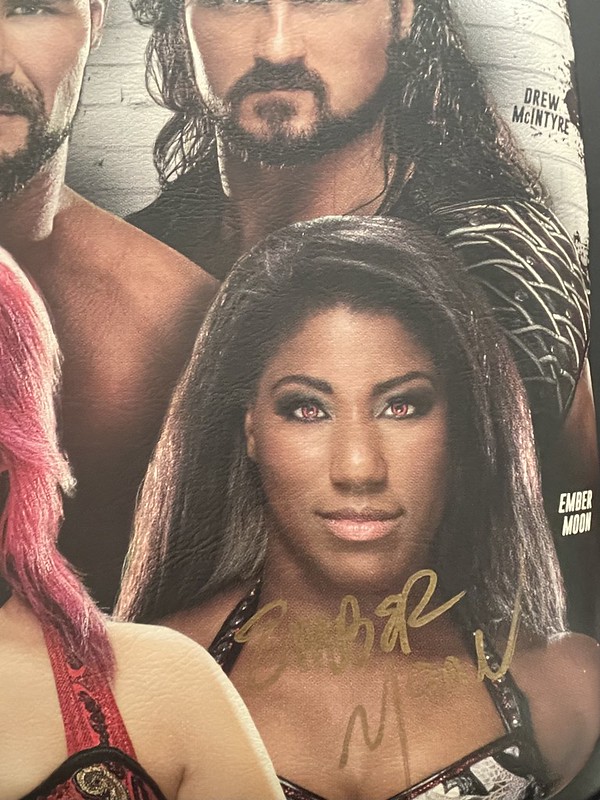 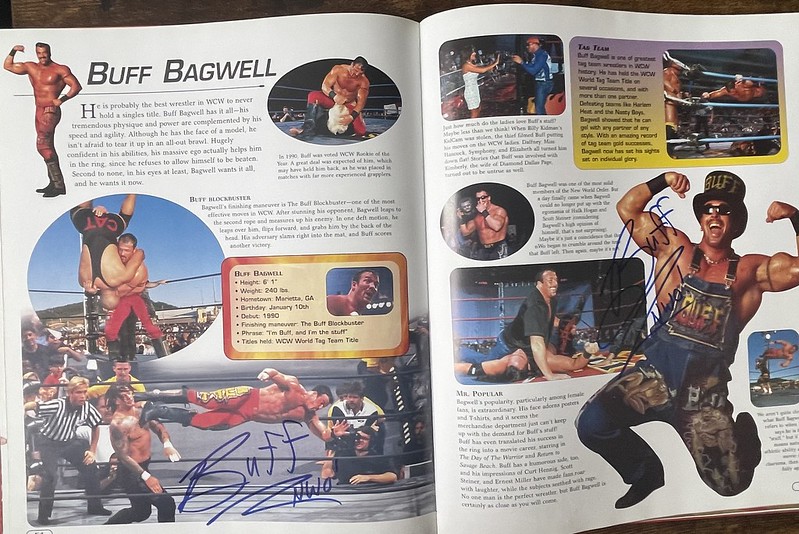 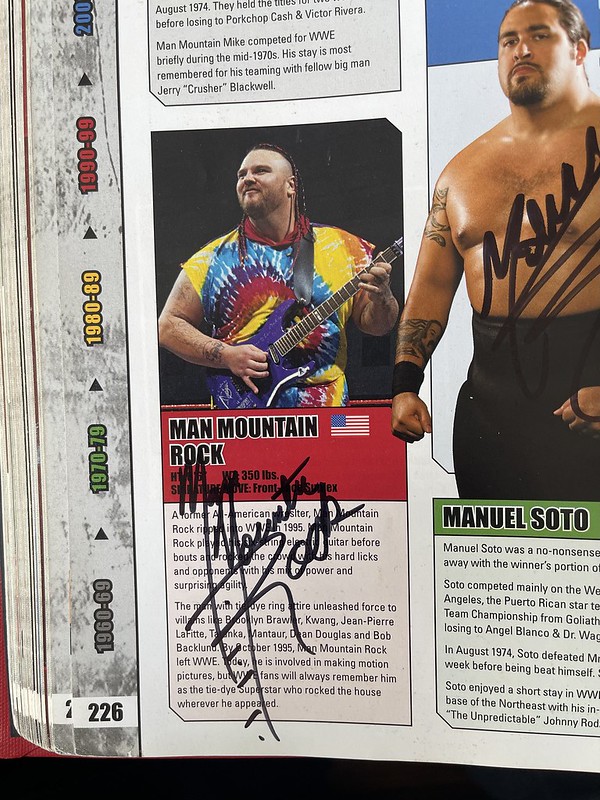 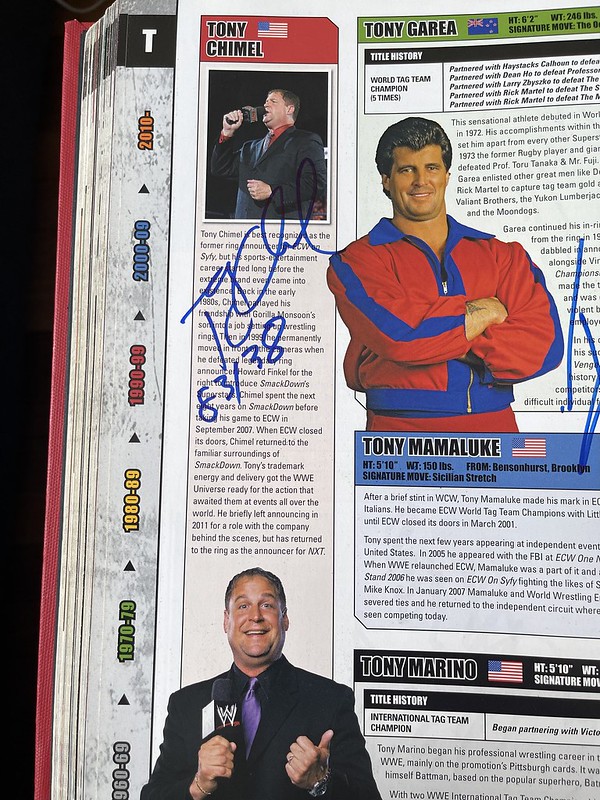 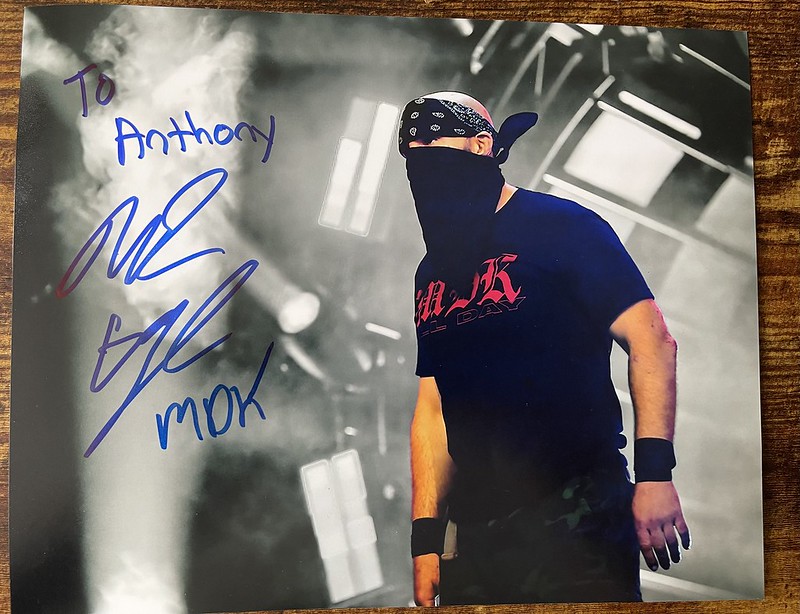