This is the second entry of the Retro Read series

If you read the first entry in the Lunchtime Retro Read series, you’d know that I wanted to pursue this hobby after meeting Chris Jericho in October of 2014. There was a problem, though:

How often are autograph signings held?

END_OF_DOCUMENT_TOKEN_TO_BE_REPLACED

My first experience with meeting a professional wrestler occurred 15 years ago.

I was a moody 12 year old kid sitting in the back of his father’s car dreading another trip to the mall. I’m sure I had my Gameboy Advance and portable CD Player with me, important tools to help pass the time.

This trip, though, would be anything but boring.

We pulled up to the Willowbrook Mall and advertised on their giant bulletin board was a Meet and Greet with WWE Superstar Shawn Michaels. I immediately asked my parents if they could buy me a ticket and, after some convincing (read: begging) they decided to indulge me.

My mom patiently waited on line with me for close to two hours. My excitement grew every single time we moved up. When it was finally my turn to meet “The Showstopper”, all I could ask was, “Are you going to be on RAW tomorrow night?” HBK chuckled and told me, “Of course, kid.” We posed for a photo, which he signed soon after.

I left that meet & greet with a sense of excitement that I had never felt before. There was something thrilling about waiting on line, talking to other fans about their memories and experiences, and actually meeting someone who I watched on TV.

I met two other wrestlers at that location over the next year or so: Torrie Wilson and Mick Foley.

I was heartbroken when the store closed its doors soon after.

I wouldn’t attend another signing until over a decade later.

It’s September of 2014 and I’m bored out of my mind. I had two part-time jobs and a lovely girlfriend but something was missing from my life. I came to the realization that I needed a hobby – but I couldn’t figure out what I wanted to do with my free time.

After a nice dinner with some family in Long Island, we decided to stop by the Barnes and Noble in Carle Place. I’ll never forget walking into the store and seeing a gigantic banner hanging from their 2nd story balcony: “MEET WRESTLER AND AUTHOR CHRIS JERICHO…”

Even though I hadn’t watched much wrestling in years, I knew that I had to attend his book signing. Jericho used to be one of my favorites and he’s someone I considered a legend. There was no question that I was going to meet him.

Fast-forward to October 14, 2014. I woke up bright and early and headed down to the Barnes & Noble at Carle Place, Long Island. I arrived just before the store opened at 9:00 AM and there was more than a handful of people lined up outside the store waiting to purchase The Best in the World: At What I Have No Idea.

The doors finally opened and I immediately purchased the book. I was given a wristband (#42) and a paper with strict instructions on when to arrive for the signing.

Jericho would later tweet out that he’d sign whatever fans wanted. I made sure to bring my Chris Jericho DVD in addition to the book.

I arrived on time but Y2J was a little bit late, which pissed some people off. When he finally made it, though, the entire B&N erupted with applause and chants of “Y2J.” 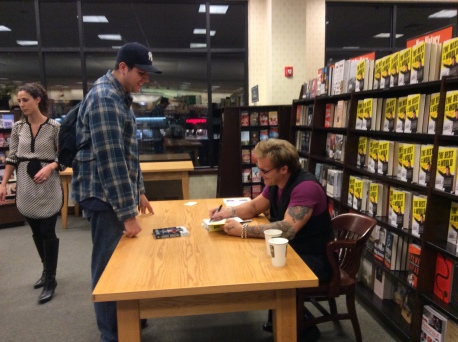 Jericho took time with everyone and was super friendly. I even scored a photo with him! 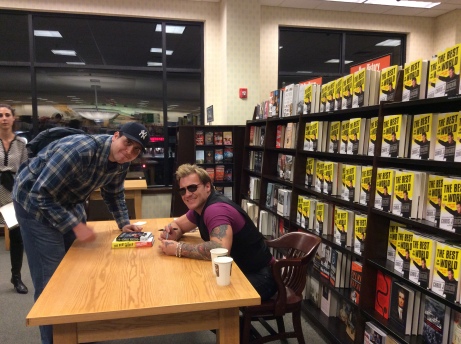 Afterward, I felt the same sense of excitement and awe after I had met HBK over a decade before. I enjoyed that feeling.

I ran home and immediately began searching for any upcoming signings and I immediately found one that piqued my interest: Scott Hall and X-Pac appearing at a store in Queens, NY, called the Wrestling Universe…