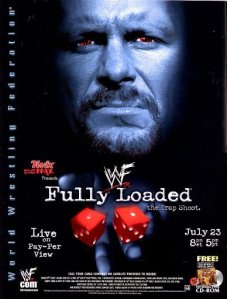 I truly feel that Triple H is one of the greatest heels of all time. The man just knows how to piss off fans and he does it amazingly well. I know there’s a segment of the WWE audience – mainly the IWC – that despise him because they think he’s anything but what’s “best for business.” That sentiment is certainly understandable considering his controversial “reign of terror” that included constant burials of anyone that got in his way. Plus, there’s the whole “married the boss’s daughter” thing. That seems to have really paid off for him and people just can’t stand that he seemingly married his way into a prominent role in the WWE’s front office.

But, nonetheless, there’s no denying that a heel Triple H is amongst the greatest of all-time, a legacy that began in late 1999. Of course, the development of a truly great heel needs an intriguing rival, someone that unquestionably has the crowd in his corner. Fans will always pay money to see their favorite wrestler beat the most despised wrestler on the planet.

Jericho entered the WWF in the summer of 1999 and immediately made an impact. Hell, that’s an understatement. The man had one of the greatest debuts in Professional Wrestling history. After one hell of an introduction, Jericho went through some growing pains in the WWF; the locker room wasn’t exactly crazy about a “WCW guy” jumping ship towards the tail-end of the Monday Night War.

Despite his legitimate heat with the WWF locker room – including Triple H – everyone knew Jericho was destined for something great in the WWF. It seemed only natural that Jericho, an emerging top baby face, enter a feud with the company’s top mega heel.

How the feud began:

Jericho challenged Triple H to a WWF Championship match on an April 17, 2000 episode of RAW is WAR. The match saw referee Earl Hebner fast count Jericho’s championship victory to the MASSIVE delight of the audience in attendance. Of course, Hebner was forced to reverse the decision because of the fast count after immense pressure from Triple H. The fans were understandably irate.

Jericho was pretty pissed, too. A master on the microphone, Jericho would get under the skin of Triple H with every insult you can imagine – including insulting his, at the time, kayfabe wife, Stephanie McMahon-Helmsley.

Stephanie was the perfect compliment to Triple H. She was someone that easily irritated the audience and fans wanted her to Shut. the Hell. UP! She was booked exceptionally well as the top dog’s bully wife; of course, that made her an easy target for the likes of Jericho.

This resulted in numerous altercations between the duo, including King of the Ring just a month before this match. It was time for the big encounter.

All of this culminated in the match ranked #100 on this list: a Last Man Standing match fully loaded (wink wink) with personal implications. No title was up for grabs, my friends. Just two rivals getting an opportunity to beat the piss out of each other.

At the time, this was the 2nd Last Man Standing match in WWF history (the first being Rock/Mankind a year earlier). Jericho came storming out of the gate and gave the fans immediate satisfaction. It wasn’t before long before, though, that Triple H mounted a dominating comeback that began once the action spilled to the outside. Hell, even Stephanie chimed in with a slap across his face.

Jericho, however, refused to give up. Triple H, livid at Jericho’s refusal to give up, tried everything he can but it just wasn’t enough. Jericho refused to stay down and, one brutal chair shot later, got the better of “The Game.” Triple H was gushing with blood and now it was Jericho’s turn to mount a comeback.

Jericho eventually put Triple H into his signature Walls of Jericho, which made Triple H immediately tap out. Unfortunately for Jericho and his Jericho-holics, a Last Man Standing match cannot be won by pinfall or submission. Still, Jericho was wearing down “The Game” and the fans were beginning to smell victory.

The fans were heavily into this match as the pace really picked up. It spilled back outside and there was a very cool spot in which Jericho and HHH nailed each other with dueling shots to the head with TV monitors. Triple H eventually grabbed his signature Sledgehammer and tried to take Jericho’s head off but “Y2J” managed to duck it.

The two made their way to the top of the announcer’s table. Eventually, HHH suplexed Jericho through the table. Both men were down as Choida began his count. It reached 9…

Triple H won. By a second.

This match was truly tremendous. Apparently Jericho and HHH legitimately had heat and that usually translate into an awesome feud. The psychology of the match was tremendous and the ending truly broke your heart. “The Game” was, once again, that damn good. Barely. But, nonetheless, victorious.