I fell behind yet again – d’oh! So you’ll get the months of June and July today and we’ll be all caught up. Let’s get to it.

Legends of the Ring XXII

Legends of the Ring XXII was a smashing success. Yes, there were hiccups and plenty of frustration but, in the end, the results are overwhelmingly positive. So instead of the usual ranting and raving, bitching and moaning, I’m just going to focus on the positives of the day.

I arrived to the Crowne Plaza hotel just before 10:00 AM. Before entering, Overthetop spotted me and introduced himself. It was an absolute pleasure to meet him! He informed me that the Superticket was being held in a different room than usual.

After picking up my tickets, I made a beeline for the new Superticket room. I asked a few people what number they were up to but, apparently, they hadn’t let anyone in. When I peeked inside, though, I saw a few people were in the room. It seemed like Mr. Terry Funk was holding up the flow of the Superticket. He’s so friendly and people were bringing a TON of stuff for him to sign. I don’t blame them because of Mr. Funk’s health.

My girlfriend offered to hold my spot in line while I went into the vendor room to knockout some pre-orders. Overthetop mentioned that the vendor room wasn’t very crowded and, sure enough, it wasn’t.

I decided my first get of the day would be Butterbean (combo) since he hardly had a line. He couldn’t have been nicer! Genuinely great guy. He signed his entry in my beloved Encyclopedia. Great guy.

I then decided to get Jamie Noble out of the way. I had this weird feeling that Noble would be leaving as soon as he could so I wanted to make sure I got him out of the way. Another fan had other ideas, however, and I had to leave the Noble line after Jenna texted me that the Superticket line was moving.

While on the line, we met a fellow fan named Mark and he an absolute pleasure to talk to on line. Big shout out to you, Mark, if you’re reading this! You’re awesome.

We were in the new Superticket room by 10:20ish and, according to the timestamp on my phone, I didn’t meet the first guests until 10:40 – Demolition. This is now my THIRD time meeting Ax and Smash but they’re always a pleasure. I had them both sign the WrestleMania IV section in my WM 32 Program. Weirdly enough, Smash signed under Ax’s picture! Oh well. I also had Smash sign a Russians 8×10 that’s previously signed by The Koloffs.

The Powers of Pain were also in face paint and were quiet but very polite. They also happened to take one of my favorite photo ops! I had them sign the Powers of Pain entry in the Encyclopedia.

Next was Scott Steiner. There was a slight delay as Disco Inferno talked with Steiner for a little over 5 minutes or so. Funny story: a fan started playing Disco Inferno’s theme song and Disco actually did a double take and chuckled. Scott signed his entry and the Steiner Brothers entry in the Encyclopedia. He was quiet but polite.

Finally, it was time to meet Terry Funk for a 2nd time. I decided to get two autographs and skip the photo op as I was very satisfied with the photo op I got from Big Event. He signed the HOF portion of the WM 32 Program as well as the Ultimate Superstars Guide. Class act as always.

We were out of the Superticket room nearly an hour later. We then waited on the Sting deluxe photo op line – luckily they were sticking to the numbered system, which worked out beautifully for me as I was #4. Sting really looked awesome; I believe he wore his ring jacket from WrestleMania 31. Totally surreal to take a picture with an icon like that.

We then made our way into the vendor room and banged out the pre-orders: first was the West Hollywood Blondes (combo), Lenny Lane and Lodi. Both were very awesome, especially Lodi as he complimented my Yankees hat. I had them sign an 8×10 I had printed out at CVS and took a cool pic.

Next was Hector Guerrero (combo), who was a class act. I felt weird asking him to sign the Gobbledy Gooker entry in the Encyclopedia but it had to be down, folks.

Elijah Burke (combo) was next and I had him sign the Encyclopedia. Very nice guy! He noticed my girlfriend’s GoPro and made us promise we wouldn’t post the footage to YouTube. I’m sure he was kidding because nothing damning was being recorded – we were just testing it out as we’re going to Mexico tomorrow and want some practice using it lol.

Next were Muhammad Hassan and Daivari (combos). Both were nice, Daivari a bit more personable. He told Hassan, “I hate when fans are taller than me!” which made me laugh.

Next was Mean Gene (combo), who immediately asked about Jenna. He was awesome! I had him sign the Encyclopedia and told him what a pleasure it was to meet him. He replied, “The pleasure, Anthony, is mine.” Awesome.

After him was La Resistance (combo). It was weird because Sylvain Grenier YELLED at the handler to pay attention and I think he was kidding but the handler looked pissed off and said something snarky in response. It was weird. Anyways, they both signed the La Resistance and their individual entries in the Encyclopedia. Too bad they didn’t put Rob Conway next to them for an easy trio photo op. Dupree also commented on my height. 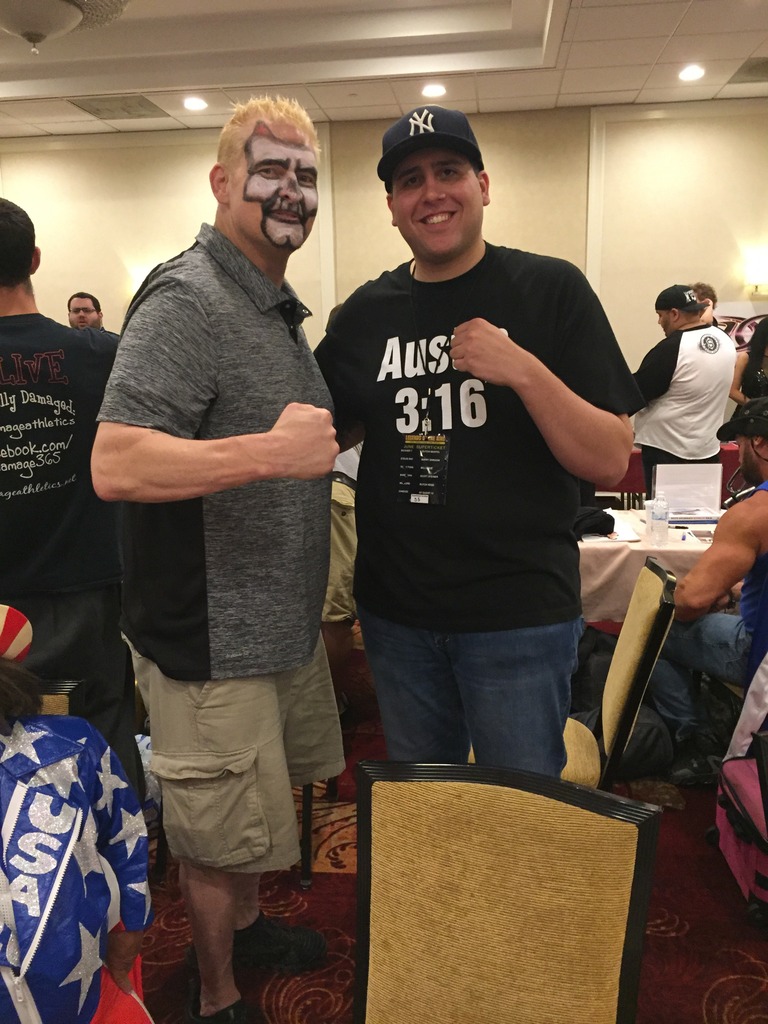 Next was Heidenreich, who was in LOD face paint. He was awesome to meet! Sadly, he was walking with a limp as his knee was bothering him. Poor guy. He still insisted on standing for a photo op though. Great guy, truly was.

Next was Jamie Noble with zero line. Seriously, not a soul even near him. He was buried in his phone, so maybe that had something to do with it. Anyways, he signed his entry and the Pitbulls entry in the Encyclopedia (previously signed by Kid Kash).

Bobby Fulton, who was incredibly nice and personable, was up next. He signed a 8×10 and was just an absolute class act.

I then met Eddie Edwards. I was supposed to meet Davey Richards and Angelina Love as well but both cancelled. Lame. Eddie was as nice as could be and signed my TNA 2014 program.

The J.O.B. Squad reunion was next. I opted for the Encyclopedia special so Al Snow and Scorpio signed all their entries. I had Meanie sign all his already so I had him sign an 8×10. Then, amazingly enough, Scorpio handed me a JOB Squad t-shirt for the photo op! I LOVE this photo op! Gillberg even jumped in! If only Hardcore Holly didn’t cancel!

After that, I was surprisingly done with the pre-orders! Back in March, Jenna gave me an awesome present for my birthday: $100 to be used at LOTR! So I decided to get another combo with Stan Hansen. I had him sign the HOF portion of the WM 32 program and got a (correct) photo op with him.

I decided to get Kevin Sullivan next, who talked me about the Red Sox’s superiority over the Yankees (boooo!). Great guy and we posed for a great pic. I had him sign the Encyclopedia.

I circled around the room and decided to get a combo with Jeff Jarrett! Double J was awesome and signed both his entries in the Encyclopedia. He then told Jenna that she was a great girlfriend for coming to all these cons with me – and that she is.

It was time for the Sting autograph. Again, I was in and out. I had Sting signed the G.A.B. Sting figure that was recently released and the HOF portion of the WM 32 Program. Awesome stuff.

I then decided to lineup for the 2nd block of the S.T. but they were only up to 1-25 (I was 55). I had a Hardy Boyz VIP ticket, so Terrance allowed me up front and I was in the room. It was hot as hell in there, man. Woof. The line moved slowly but I got to meet two childhood favorites of mine. They signed their entries in the Encyclopedia (minus the Brood) and a 8×10.

I then made my way back into the S.T. room. The first two were the Harlem Heat. Booker T was in a GREAT mood and even gave a shout out to my GoPro lol. It was truly awesome to meet him and Stevie. I had Stevie sign the WCW Ultimate Superstars Guide while Booker signed his entries in the Encyclopedia (minus the nWo) and his entry in the WM 32 program.

Next was Candice Michelle, who looked PHENOMENAL. She insisted on two pics with everyone – a standard and one where she’s leaning in for a kiss on the cheek. She wan absolute sweetheart. She signed her entry in the Encyclopedia.

Next was Dutch Mantel, who was very nice. I had him sign the Encyclopedia.

Finally…Butch Reed. He was quite but polite and I had him sign the Encyclopedia as well to finally end the day.

Overall, it was an exhausting day with bursts of frustration but hey…I can’t deny the results. I thought the organization of the con was a bit disorganized, especially in comparison to the others, but still very manageable.

Also, it was great seeing Gene, Greg and meeting CM Showstopper as well as seeing a lot of other people I usually see around the con circuit.