The Year in Review continues with a look back at the month of July. This was a rather Indie-centric month as I attended my first ever Evolve and El Rey Lucha shows, both held at La Boom in Queens, NY. Enjoy!

I went into this show with a bit of trepidation because bell time was scheduled for 4:00 PM with doors opening ~3:30 PM, leaving a very small window for meet and greets. Plus, Evolve wasn’t even advertising a pre-show meet & greet although it’s practically standard for Indie talent to be selling their merch before and after shows.
I was late arriving to La Boom (I left my stupid ticket at home), so I arrived right as the back of the line was being let in. Apparently I could’ve skipped the entire line since I had a physical ticket and that may have cost me meeting TJ Perkins. Oh well.

As I walked into the main coordioor, I immediately spotted Roderick Strong at his merch table. I really wanted him in my ROH/NJPW Global Wars ’14 program but he’s never signed during the last few ROH shows I’ve attended. Roddy’s also rumored to be NXT bound [he is now in NXT], so this was a fairly big name to get. He was incredibly nice and signed the program, a personalized 8×10, and took a photo for $10! Awesome deal for an awesome wrestler.

Up next was Zack Sabre Jr., probably my biggest want of the day. ZSJ is a major rising star in wrestling and is was in the WWE’s Cruiserweight Classic. It wouldn’t shock me if he’s NXT bound either. ZSJ was nice and signed my BOLA 15 Stage Two DVD and took a photo for free!

Next was Marty Scrull, another major Indie name that’s elevated his status quite a bit this past year and is another potential NXT signee. He was incredibly friendly! He personalized an awesome match card of him vs. The Joker from Batman and took a pic…for free! How awesome is that?! He was a great meet.

In between the meets, I go to say hi to Ira and meet WOODMO! It’s great meeting another member of the board. They both took photo ops for me, so thank you both!

I saw Johnny Gargano, TJP, and Drew Gulak had their merch out but they were nowhere to be seen. I overheard Ethan Page tell a fan that Gargano would sell merch after the show.

The show was tremendous. During the main event, I spotted Matt Riddle near the merch table and he giddily agreed to take a photo op for free. He commented on my height and generally just seemed to be a great, happy sort of guy. Awesome meet.

After the show, I saw Johnny Gargano was at his table. I had him sign my GFW program and take a photo op…for free! He was quiet but nice.

Next to Gargano was Ethan Page, so I decided on a selfie.

Adam Rose was there and was charging $20 for a photo op (he was in his gear) but I passed as I’m meeting him at LOTR. Also, I saw Ira and WOODMO were waiting for more wrestlers. I would’ve loved to have gotten Cedric Alexander but I had to catch a train back to the city. I’ll definitely (hopefully) get him next time.

Club La Boom was hosting a AAA “El Rey del Underground” show earlier this afternoon. Advertised was Fenix and Pentagon Jr. (now Pentagon Dark), two of the biggest stars featured on Lucha Underground (and Lucha Libre in general). Pentagon Jr./Dark is INSANELY over and will likely become the biggest International star within the next year or so. He’s that popular and it wouldn’t shock me if he was in NXT one day.

Anyways, I pre-ordered a $45 ticket that included a pre-show meet and greet with the luchadores. I wasn’t sure if that meant all the wrestlers were scheduled to appear or if was just Pentagon Jr. & Fenix. I had no interest in meeting the other luchadores that were advertised for this show, so my $45 would go down the drain if they weren’t signing and/or doing photo ops. Big risk.

I got to La Boom right before 3:00 PM, right as doors were scheduled to open. I waited on line for about 20 minutes (do shows EVER open doors when they say they will) before getting into the club. I was frisked before being given a VIP wristband. I had been here just once before — last week, actually — so I thought the luchadores would be set up where the Evolve wrestlers were. They weren’t. All I saw was a raffle table that featured a Rey Mysterio Jr. mask and another table littered with papers.

I went into the actual room where the show would be held and saw three merch tables — one we almost exclusively selling luchadore masks — but still didn’t see where the wrestlers would be doing the signings/photo ops.

Anyways, they had a professional photographer on hand to snap the photo op. This guy went up there with a small satchel FILLED with masks. He spent probably 10-15 minutes getting stuff signed by Pentagon Jr. (it looked like Fenix refused to sign any masks). It was so bad that the promoter had to come over TWICE to tell him to get off the stage. It was bizarre. 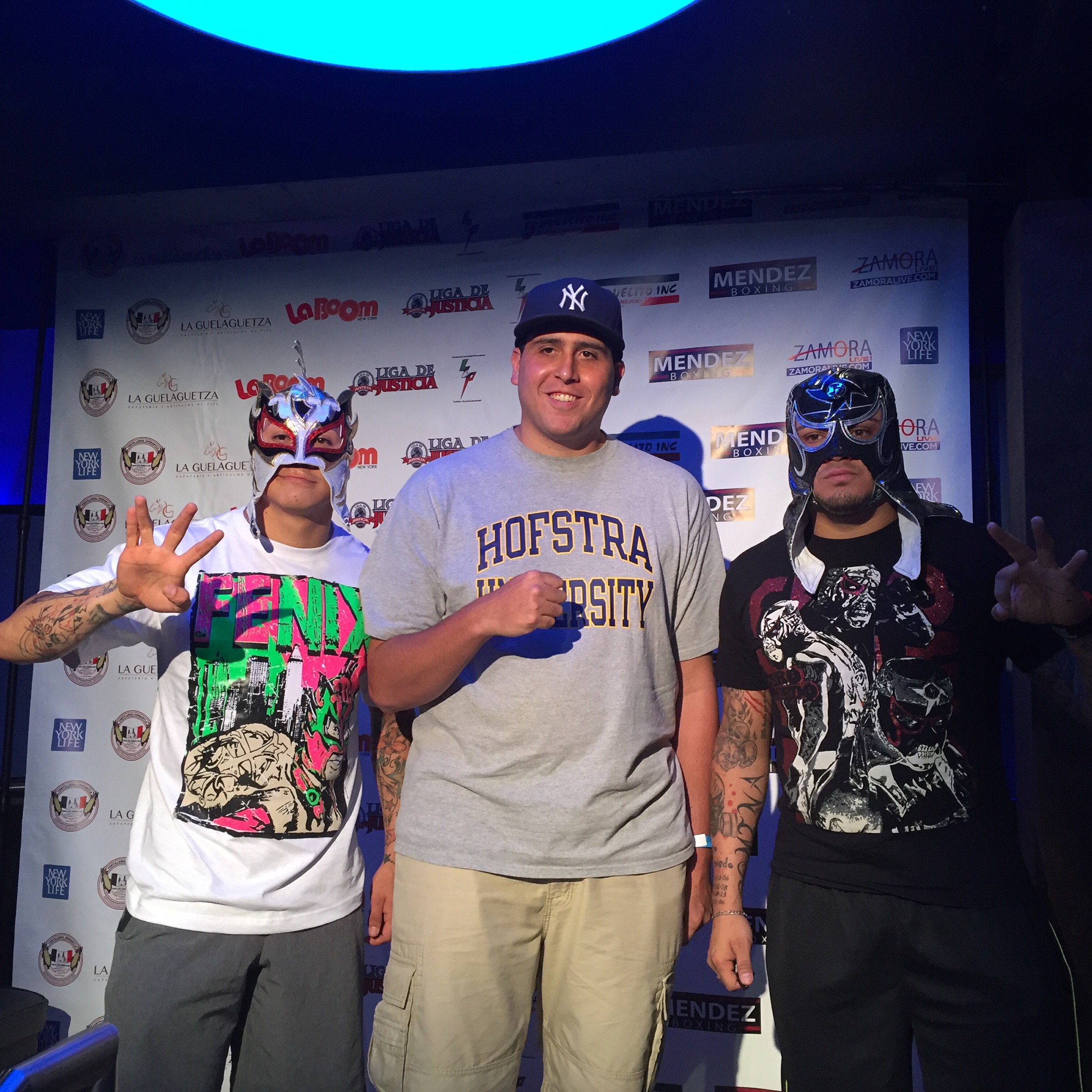 After the guy was gone, it was quickly my turn. I had the handler take a photo on my iPhone in addition to my pro photo op. They also gave me a free event poster which Fenix & Pentagon Jr. signed the back of.

After that, I went to my seat but I work tonight and just wanted to be home so I left. So, all in all, a pro photo op (you have to download their App to access the pro photos and they haven’t been posted yet), photo op on my camera, and a free signed poster for $45? Not bad at all. 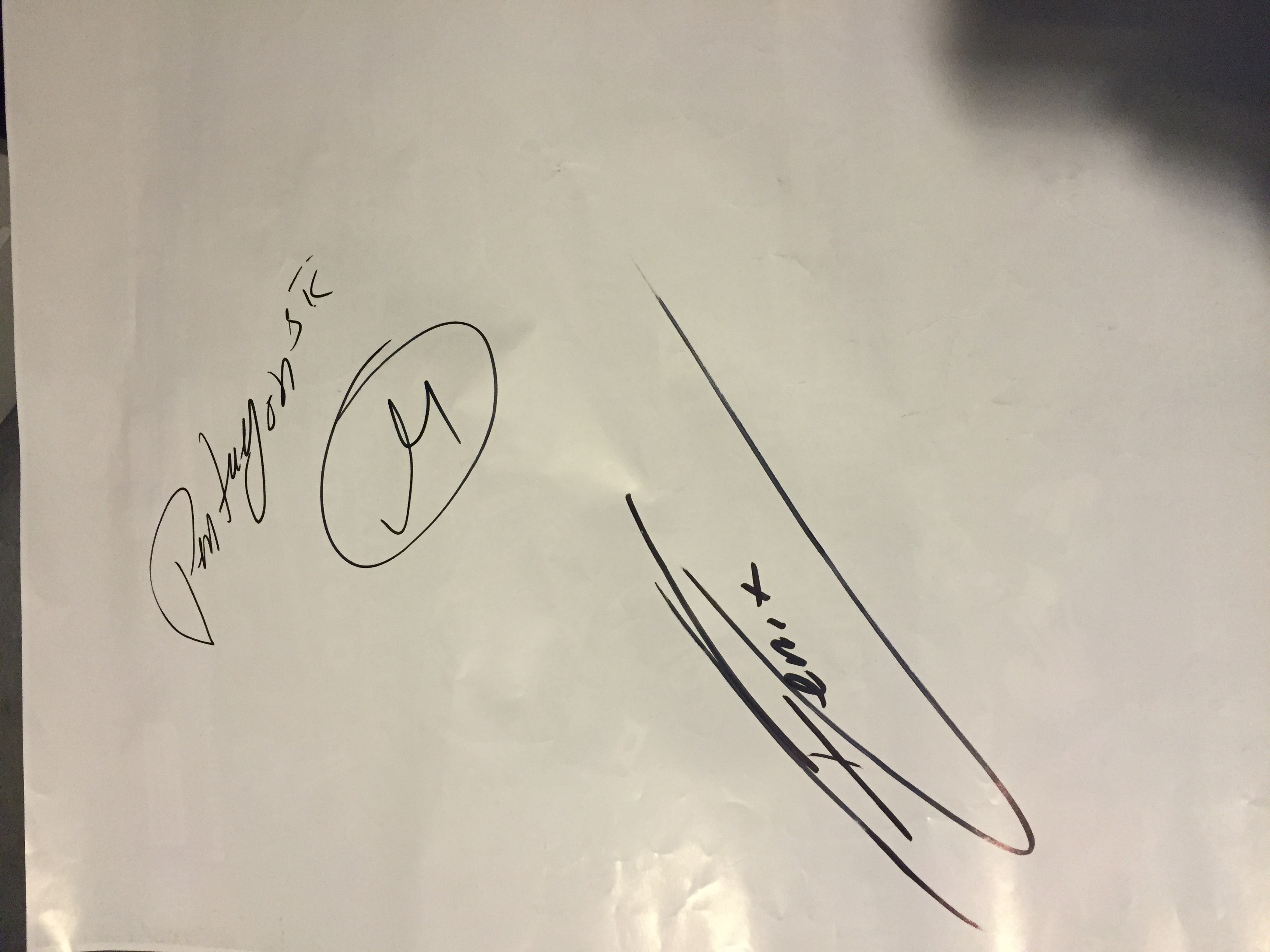 Tune in for tomorrow when we’ll cover August, a HUGE month because it was SummerSlam week!