Another March, another Big Event is in the books. This one was fairly easy with only a couple of stressful moments here and there. So let’s get right into it:

Jenna and I stayed over at the Hampton Inn (the hotel next to LaGuardia Plaza). I woke up around 8 and headed down to the lobby around 9 to pick up our tickets. We went into the vendor room(s) but they were all empty, so Jenna and I hung out in the lobby for about 30-40 minutes before venturing back inside the main vendor room.

I spotted Ron Simmons at his table and decided to cash-in on my pre-order. Simmons was as nice as could be! Truly an awesome guy. I had him sign my WM 32/HOF Program. I still need him in the Encyclopedia but he’s in there a few times, so I’ll knock him out all at once another time. 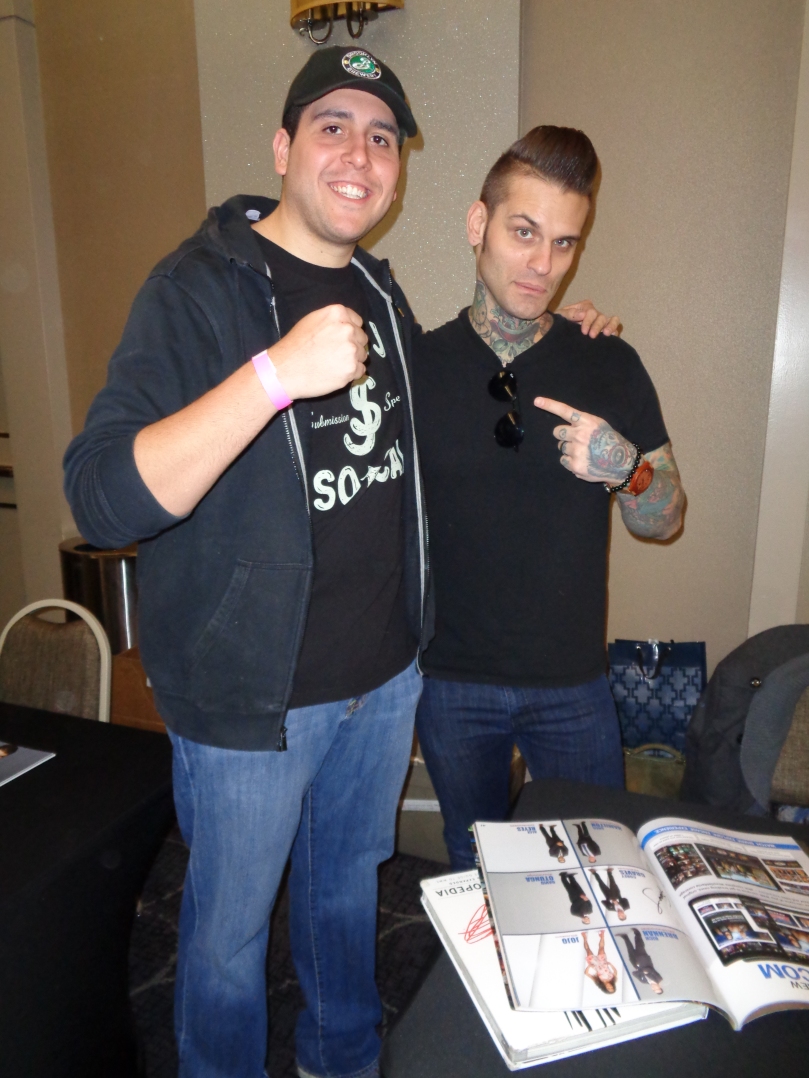 I saw Corey Graves across the room and he already had a really decent line, so I immediately hopped on. The line was held up a bit because a girl had brought Corey a gift, which he opened in front of her. Very nice stuff. He was tremendously gracious, asked me where I was from, said he couldn’t believe people came down to meet him. Great guy. He, too, signed the WM 32/HOF program.

It was a few minutes past 10:00 AM and I decided to head over to the bar area to meet Bret Hart. I had a VIP ticket and I got to jump a pretty decent line (it wrapped around the bar). Bret was quiet but nice and I really, really love his autograph. I had him sign my WWE Ultimate Superstars Guide, WM 32/HOF Program, 2009 HOF Program, and the WCW Ultimate Guide. The line ran VERY smoothly.

After Bret, my gut was telling me to get Harley Race next…and thank God I listened to my gut. First off, the line was absolutely jam-packed. A sea of frigging humanity. Jenna asked the handler where VIPs went and, thankfully, they were just finishing up with the VIP line. Funny story: this guy who had a regular ticket asked if he could cut in and I politely declined. He told me he had been waiting for over an hour on the line…brutal. That’s why I buy VIP. Priority in line for major guests is a must, man. Anyways, Race was as polite as could be. I thanked him for coming down, told him he was one of the greatest ever, and thanked him for his years. He seemed genuinely moved. Great guy. This might’ve been my first and last opportunity to meet an icon like Race.

After Race, I decided to hop on Lita’s friggin huge line. It wasn’t really moving that quickly, so Jenna held my spot while I tried to knock out some other pre-orders.

Marc Mero‘s line was free, so I cashed-in on my pre-order. He was so frigging nice and thanked me for coming on down. I told him he was one of my favorite heels when I was a kid and he laughed. Great guy. He signed the Encyclopedia.

I met Corporal Kirchner, who was as nice as could be and teased me for being too tall. He signed the Encyclopedia.

I went back over to the Lita line, which had moved a bit. About 15 minutes later, it was my turn to meet her. She immediately commented on my Samoa Joe t-shirt, saying it’s about time WWE had called him up after spending 20 years in NXT lmao. She was terrific and really beautiful in person. She signed the Encyclopedia and my WM 32/HOF Program.

I decided to hop on the Great Khali’s MASSIVE line.

While I was on line, I spotted Paige kissing Alberto Del Rio a few tables over. I thought about meeting ADR and seeing if I could get Paige but I was told she was charging $100. Yeah, no thanks.

Anyways, Khali’s line felt like it went on forever and ever before I eventually met him. His hand…it was unlike anything I ever felt before. Just massive. I had him sign both Encyclopedias and the Ultimate Superstar Guide. Quiet, polite guy.

Immediately after Khali, I met Itsuki Yamazaki of the Jumping Bomb Angels. She was very nice and signed the JBA’s entry in the Encyclopedia.

After her was Steve “Mongo” McMichael. He had a decent line but it went by quickly. I had him sign his entry in the Encyclopedia Vol. III. I love that he threw up the four for the photo op. I think the only Horsemen I’ve yet to meet is Ole Anderson and, well, I highly doubt that will ever happen.

Mean Gene was up next; he was a repeated guest but I had two more items for him to sign: the WM 32/HOF Program and the 2009 HOF Program. Great guy as always.

Next was Boogeyman, who was in his full gear and face paint. Tremendous guy who really goes all out when he does appearances. He signed the Encyclopedia. The lighting sucked and I’m not too happy with how the photo came out; luckily, however, he’ll be at LOTR so I’ll definitely get a better shot there.

Following Boogeyman was SoCal Val, who was REALLY nice! She signed the TNA 2010 Program.

I went into the corridor to meet Sexy Star. She asked me for my name and I said, “Anthony!” and she repeated it back to me quizzically. I’m hispanic so I repeated my name but with hispanic dialect. I believe she told Taya, who was seated next to her, “This guy doesn’t think I speak English.” Woah there. I speak spanish, Sexy Star! Misunderstanding, I guess. Anyways, she signed an 8×10 and took a photo with me.

After that, I met Koko B. Ware (the $5 admission guest). I had two autograph tickets to sign but someone didn’t need there’s so they offered it to me for free! Sweet. Koko signed my WM 32/HOF program, WWE Ultimate Superstar Guide, and the High Energy entry in the Encyclopedia.

Sidestory: so right before I met Ware, ADR and Paige exited and the three chated. After they left, one of the security guards SHOUTED something really incoherently but really, really angrily. He scared the living shit out of everyone because it was out of nowhere. Then he started screaming like a maniac again, “MAKE WAY! MAKE WAY!” It turns out Harley was being wheeled out of the show but man…fucking guard was a loon! Koko told us, “I thought we were getting shot!”

I then met Al Perez. He was awesome and was amazed by my AJPW program. He told us that his career passed him by and he’s so amazed at some of the stuff fans bring for him to sign. He was so awesome. I had him sign the AJPW ’94 Tag League program and the Encyclopedia. Great guy.

Following Perez, I went back into the vendor room – which emptied out SIGNIFICANTLY after Paige and ADR left – to get Jerry Lynn. Terrific guy, really nice. He signed the Encyclopedia.

I was done with pre-orders but, with some time to spare, I decided to get Kazarian. He was a $20 combo and I had him sign my Encyclopedia. Great guy.

Up next were two guys I’ve met several times before: the Young Bucks. They were $20 for a combo ($10 cheaper than what they will be at ROH shows). I had them sign my PWG card (Nick complimented me on it) and I got to pose with their belts. Great photo.

On the way out, I got a $20 combo from Donovan Dijak. Great guy and someone WWE will likely snatch up soon.

And that was that. Easy enough time. Great seeing everyone from the board!