This past Saturday was a return to form for yours truly. I haven’t been as active as I’d like to be in this hobby for a number of reasons (lack of desirable names, funds, and time are all contributors), so I was absolutely thrilled to devote an entire Saturday to get combos. I did not get everyone I wanted but, hey, there’s always next time, right? Right?!? Right. Anyways, let’s get to it:

Saturday began with a trip to the Wrestling Universe for The Warlord. The Wrestling Universe had advertised a “free autograph with purchase of a $10 8×10” and “4 additional autographs.” I know everyone scoffs at the “free but you have to buy something first” method but the Universe was very clear in what they were offering — it was essentially a $10 combo with 4 extra items. More on this later.

Jenna dropped me off at the nearby bus stop and my bus practically flew into Port Authority Bus Terminal. I then took the short walk to Penn Station, boarded the LIRR to Aubrudnale, and took another short walk from there to the Universe. I arrived ~1:45 PM and joined 4 other people waiting in line. Eric Simms and the Warlord arrived just before 2:00 PM. I overheard Simms telling a fellow customer that Steve Armstrong had canceled his upcoming Legends of the Ring/Wrestling Universe appearances in June.

Unrelated but I feel the need to get this off my chest: someone else overheard this and seemed genuinely bummed that Armstrong had canceled; however, it became abundantly clear that this guy had no clue who Armstrong was, had no clue who the Southern Boys were, and referred to Steve as “Scott” and “Brad” (who died in 2012) later in a conversation with someone else. It just blows my mind that there are people who spend good money to meet wrestlers they’ve never even heard of. It truly blows my mind but, hey, you do you.

Anyways, the signing started just after 2:00 PM and they let in everyone two at a time. I picked out an 8×10 photo. The person behind me began speaking to Jack about the signing and Jack was pissed at someone who trolled his Facebook posts plugging this signing. This person (allegedly) felt that Jack was misrepresenting this “free” signing and encouraged people to boycott. Let’s just say that I wouldn’t be shocked if this fan was confronted at the Big Event. 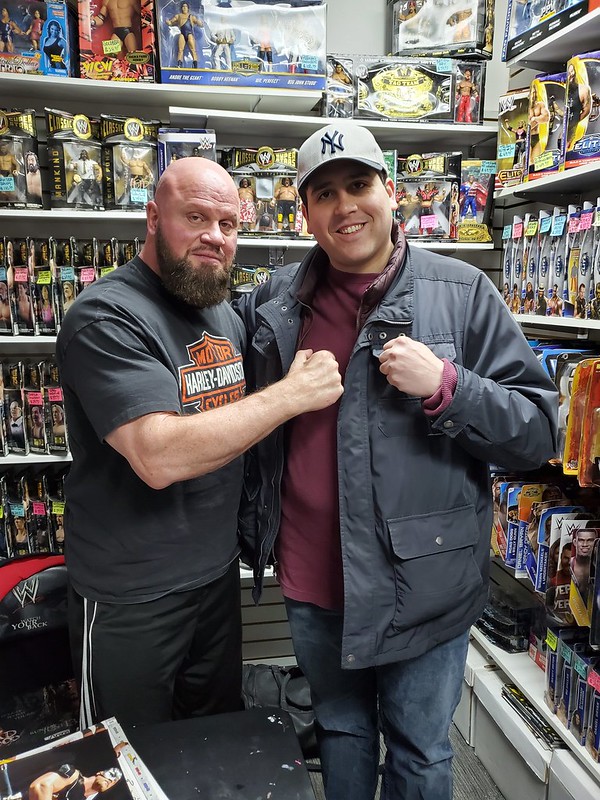 I was quickly brought into the room and the Warlord was quiet but polite. I had met him before (with Barbarian) but still needed his autograph on the Warlord entry in my battered Encyclopedia. Quick and easy signing.

I then hopped back on the LIRR and got off at Woodside. From there, I hopped in a Lyft to Club LaBoom, which was hosting a Shine Wrestling show prior to Evolve 145. I had two wants for this event: Ivelisse and Marti Belle. Shine had advertised a general meet & greet with talent before and after the show, so I was hoping to score both.

I arrived at LaBoom just before 3:00 PM and was disappointed to see a near-empty lobby. I went inside the venue and just watched the show, which was mostly bad. I did spot Marti Belle by the bar (in her gear with a hoodie over it). I was going to approach her for the combo but she zipped by me and herded in a big group of people (I assume they were her family). She chatted with them for a few minutes, escorted them to their seats, and then said she had to run to the locker room. She once again sprinted by me and I wouldn’t see her again. Miss #1 was in the books.

The show ended and I hoped to see Ivelisse and Belle in the lobby but, sadly, they were nowhere to be found. Candy Cartwright, Jenna (not my Jenna!), and a couple of other wrestlers that I had little interest in spending money on had made themselves available. Security then shouted for everyone to leave and line up outside if we had tickets for the Evolve show.

I went outside and was stunned to see how long the line was. Fortunately, my buddy, Steven had a decent spot on the line and called me over to join him and his group of pals. We bullshitted outside for about 20-30 minutes before they let us in. It was very clear that almost everyone was participating in the meet & greet, which was going to slow everything down.

While we made our way into the venue, I spotted Ivelisse by the bar and decided to pounce. I had an 8×10 of her and Mercedes Martinez (who previously signed it), new Sharpie in hand, and politely asked her for an autograph. She agreed though I could tell she was a little annoyed. This is my second encounter with her where she was annoyed so whatever. At least she didn’t ruin my 8×10 this time…

I hopped back online and finally made my way up to the ticket table. Cool story: I went to pre-order combos for Keith Lee and Rhea Ripley and discovered that I had accumulated enough points to redeem $40 off my order! I then decided to get Tommaso Ciampa with the money I had saved. I had no clue WWN had this system in place so it was a very pleasant surprise indeed. 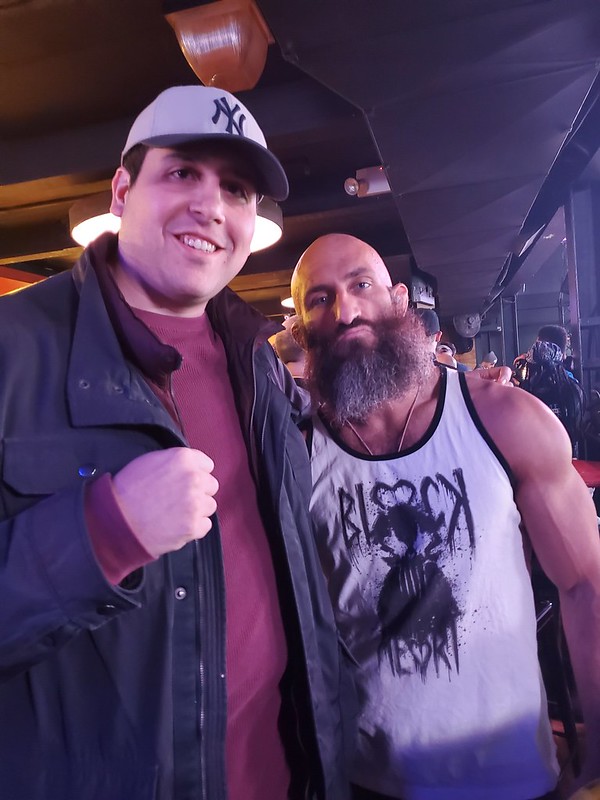 Tommaso Ciampa did not have much of a line, so I went to him first. He was extremely polite with everyone and is one of those guys that makes everyone feel comfortable. Great dude. I had him sign my WrestleMania 35 program. 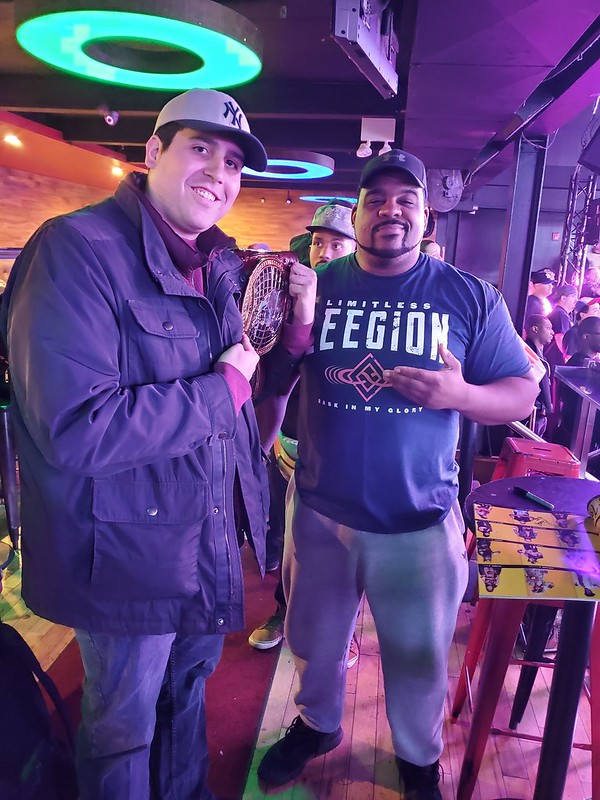 I was told by one of the Evolve staffers (who were all very nice and helpful) that I had to hop on the end of the Keith Lee line which looked long but it was only about a 20-minute wait. Lee was very nice and one of the humblest guys around. I’ve met him twice and Evolve shows but never snagged a ‘graph or a good photo op. He had his NXT North American title and I asked him if I could pose with it, which he happily obliged. It was cramped so I had to stand at an angle but I’m happy with the pic. 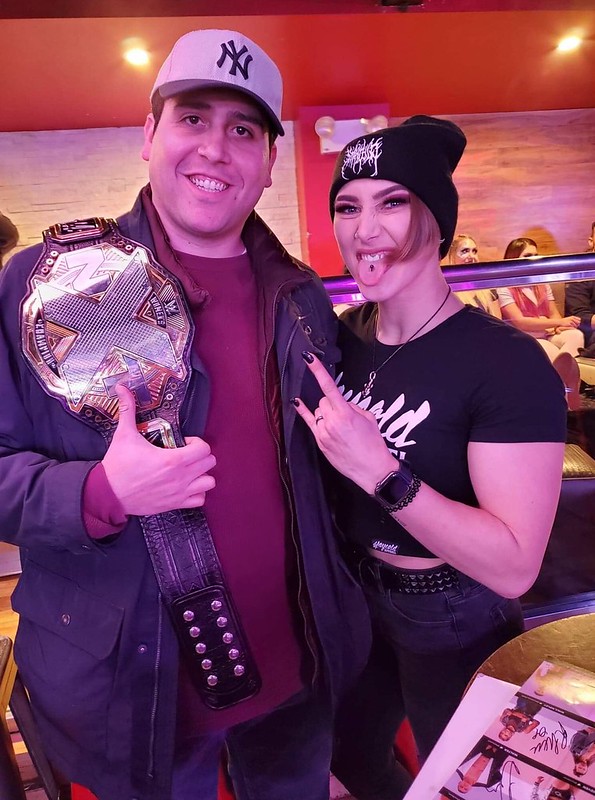 I then hopped on the Rhea Ripley line, which had only grown since everyone migrated over from Keith Lee’s line. This, too, was another 20-minute wait but it was well worth it. Rhea was incredibly nice though the guy in front of me had her stumped because he told her his “dream” match was Rhea vs…… Kelly Kelly. Okay then. Anyways, she offered me to pose with her belt, which I happily accepted.

I was absolutely drained at this point. I wanted to meet Mansoor and Jake Atlas but it was already 7 PM and I needed to get my ass home. I ran into board members Lanza, WOODMO, and Ira on my way out. My phone died, so I had to grab my iPad in the lobby, connect to the Wifi, download Google Duo, and call Jenna to tell her I was on my way.

The old me would’ve stuck around for the entire show and get Mansoor and Atlas but I’m learning to just go the hell home and hope I get ‘em next time. Maybe this wasn’t quite my true return to form but it was close! Thanks for reading. 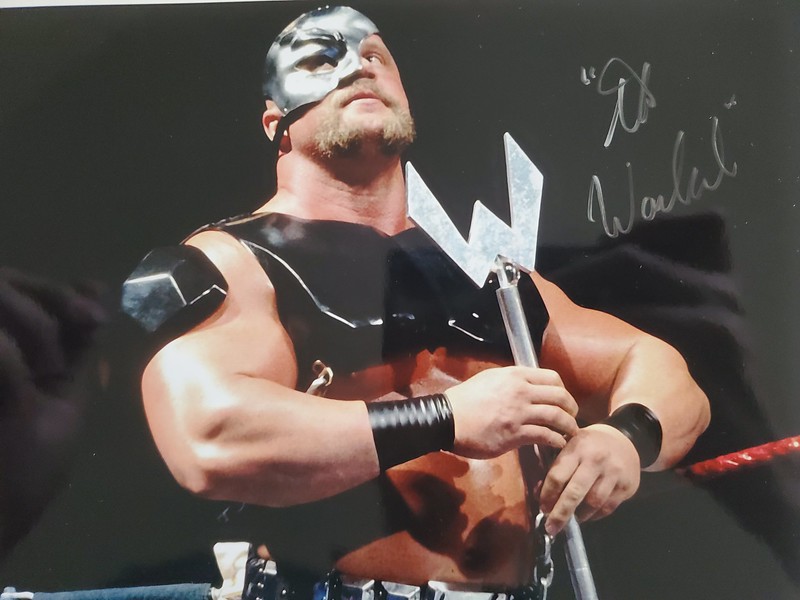 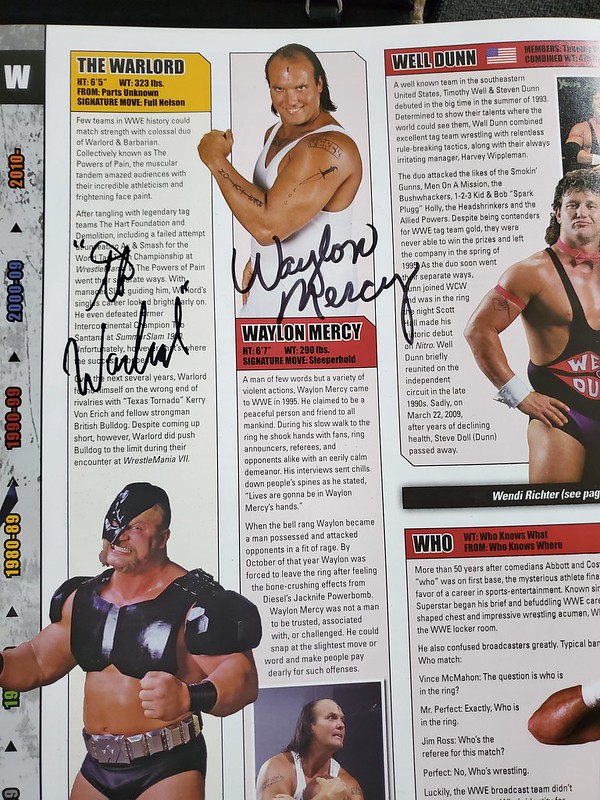 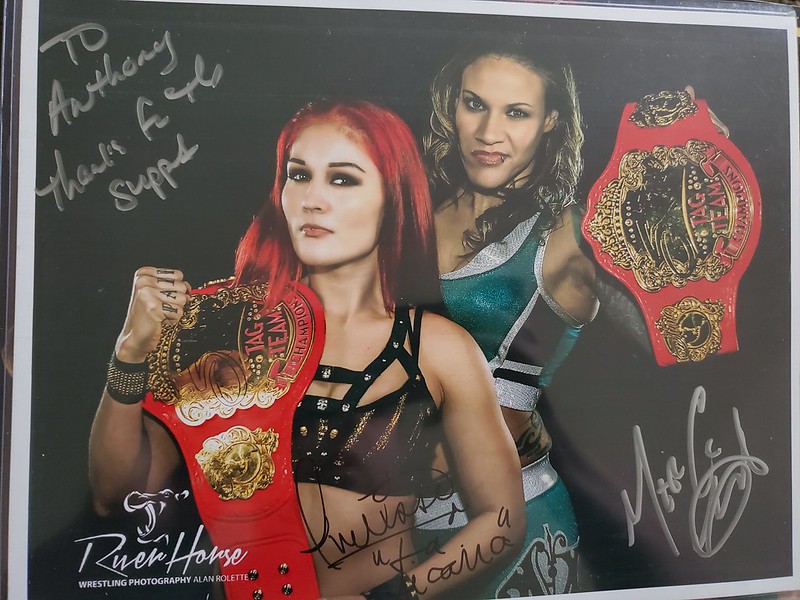 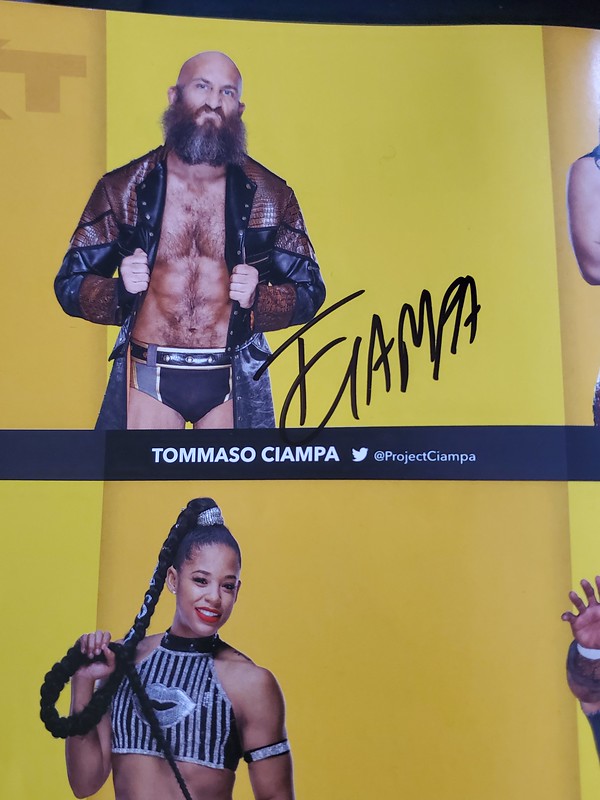 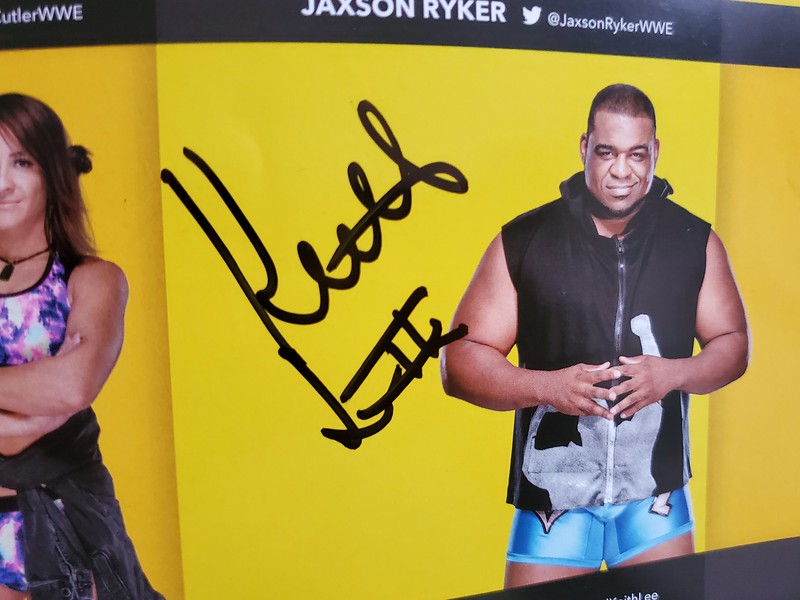 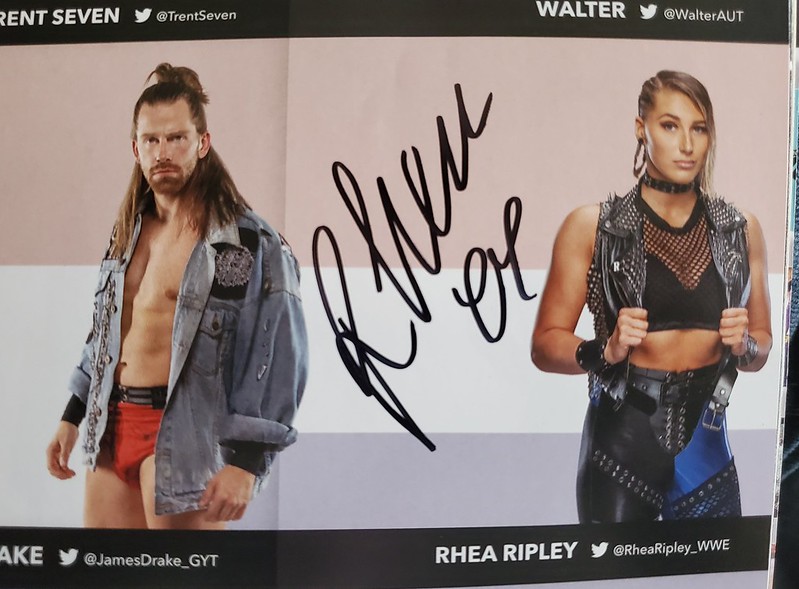