I always look forward to the last weekend in January because I’m guaranteed to meet the New York Yankees of past and present. MAB Celebrity Services hosts a Yankee-centric show (Bronx Tale, Pinstripe Parade, etc.) that are typically loaded with talent.

This show was the exception.

The only current member of the team was its manager, Aaron Boone, who appeared in 2018 (and maybe last year though I can’t say for certain). Legitimate legends and/or Hall of Famers like Reggie Jackson, Dave Winfield, Tim Raines, and Paul O’Neill were scheduled to appear but they’re the definition of “Virgil-esque.”

Saturday morning was going to be incredibly, incredibly light for me: photo ops with Andruw Jones and Lee Mazelli with Bobby Shantz on Sunday.

So let’s get to this bite-sized report.

MAB switched the location of their show to the DoubleTree in Fairfield (after originally advertising it at their Hasbrouck Heights location). The hotel itself was pretty impressive and spacious, something they could’ve used for their previous shows. The layout: take a right at the lobby to find yourself in a very spacious corridor where admission, will-call, and a memorabilia table were set up. I picked up my tickets and basically had 1 hour to kill until my Mazelli photo op, so I walked across the parking lot and dicked around at Target.

Side story: I went back to the hotel and decided to use the bathroom before my first photo op. Someone else decided to take a vile shit, the true marker of being at a convention.

Anyways, 11 AM came and I spotted Lee Mazelli walking towards the photo op room. The host of the show, though, had other ideas and escorted Mazelli to the autograph room. Not great! A couple of people asked him if Mazelli would do the photo ops after signing and the host “had no clue” Mazelli was doing ops because “his people” told him that he wasn’t. Sigh. So I had to wait a while.

While I caught up with my pal Chris and his mom, I noticed that the printouts of the Paul O’Neill ops were awful. BG Entertainment (the company who does the photo ops) has taken a ton of heat for their work over the years though my experience with them has been mostly positive. I have witnessed some sub-par ops, though, so I’ve always held my breath going into these shows — and I started to panic when I saw the quality of the O’Neill shots. There was this odd, orange tint to them — as if the photos had been stored in some cardboard box for decades. I overheard the crew offer up two different explanations: 1.) the orange tint was caused by the lighting; 2). the settings on the camera were wrong. They decided to swap out the camera for the next batch of ops, so I prayed that this would resolve the issue.

Lee Mazzilli had finished up signing and finally did his ops. Mazzilli was a former New York Met and Yankee though that was way before my time. I remember Mazzilli as the Yankees first base coach from 2000-2003. Mazzilli was really nice and personable. 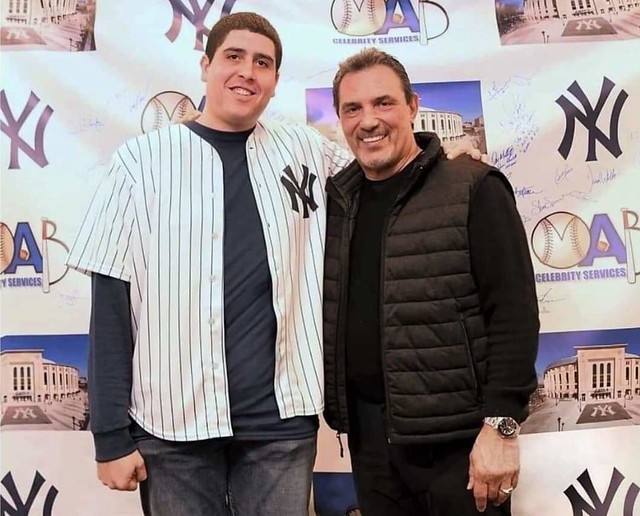 Some time passed and the Mazzilli ops were being printed out…and they had the same, orange tint to them that the O’Neill ops had. Sure enough, mine came out incredibly orange. Mazzilli was gone, though, and my best hope was for Jenna to edit the .jpeg that was being emailed to customers (which she did). I then said a brief hello to fellow hobbyist Greg in the corridor. 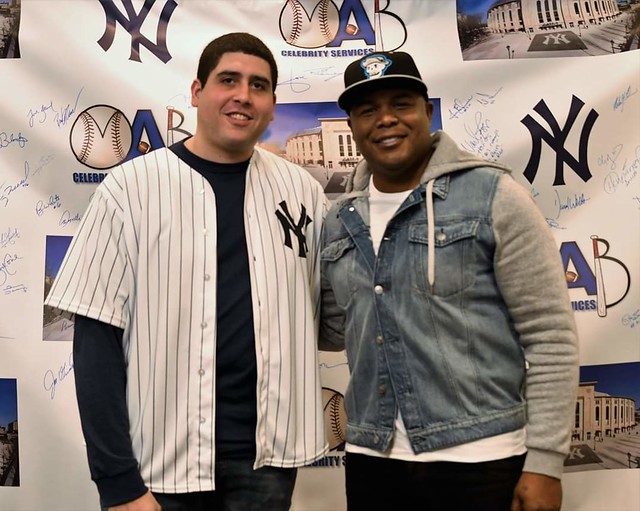 Andruw Jones was next and, once again, they had him sign first. The excuse was “his people wanted him to sign first.” An hour or so goes by and I finally score the photo op. Jones was quiet but nice and I was relieved that the op printed out clearly

I arrived just before 1:00 PM for my one and only get: Bobby Shantz. I debated ponying up for Ken Griffey, Sr. and Luis Tiant but I didn’t want to take the gamble that the ops would be orange again. Grr. 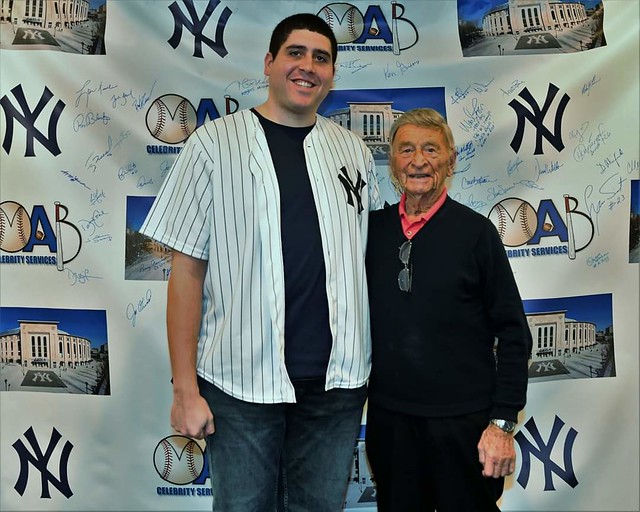 Shantz walked in and guess what? He signed first! I had to wait over an hour for my one and only op of the day. Shantz is 94 years old and, man, the dude not only looks great but he has one hell of a firm handshake. Nuts. Thankfully, the op printed out crystal clear. I said my goodbyes and was off.

Here are two funny stories for you guys:

The lineup was beyond weak. There were some rumblings that MAB had booked a major, major headliner that wound up canceling and left them in the bind. I have no idea how true that is but it seems plausible. I will say this, though: the turnout did not appear to be poor despite the lacking guest list. Really amazing.