March 7, 2015, is a milestone moment for yours truly: my first-ever wrestling convention The Big Event VIII. This show was headlined by Rey Mysterio, Jr. and featured major names such as Ric Flair, Dusty Rhodes, The Dudley Boyz, Magnum T.A., and Samoa Joe (amongst others). It was a wonderful experience and I found myself counting down the days to my next convention.

Fast-forward to March 7, 2020, to The Big Event XVIII. This show was headlined by The Undertaker and featured major names such as Bret Hart, Braun Strowman, and Lita (amongst others). This, too, was a wonderful experience and part of me is amazed that I’m still going strong 5 years later. Thanks to this hobby, I’ve made some great friends and met legendary wrestlers and various celebrities. It’s been a fantastic 5 years and here’s to many, many more!

Now with all that being said…

Let’s get to the report!

The alarm sounded at 7:15 AM and, for just a moment, I wanted to quit this hobby. I had a long week and waking up at 7:15 AM on a Saturday morning was the last thing I wanted to do. Jenna and I opted against staying at the LaGuardia Plaza Hotel or the nearby Hampton Inn for two reasons: 1). We live about a half-hour away from the LaGuardia Plaza Hotel; 2). The rates are just too damn expensive (we’re talking over $200 after fees for spending a few hours in a meh hotel).

We were nervous about the dreaded parking situation but Big Event alleviated some of our fears after they mentioned on one of their Facebook posts that the lot across the street would finally be open to Big Event guests. We left our apartment ~7:45 AM, stopped off for some Dunkin’, and flew to Queens. We hit ZERO traffic and made it just under 30 minutes.

We were surprised to see that the hotel garage was still open…but, of course, there were no spots available. Jenna dropped me off near the entrance to the LaGuardia Plaza while she parked across the street.

The line to pick up tickets was long. Here’s an image from Google Maps to give you a general idea:

The line kept growing, too, which was quite amazing to see. The Undertaker was drawing them in like nobody’s business, man. It took about 45 minutes in the freezing cold to get into the building (they actually had the will-call table outside but quickly moved it to the lobby because it was so damn cold). While we were waiting on the line, a woman kept screaming, “EVERYONE NEEDS A GENERAL ADMISSION TICKET OR A V.I.P. TICKET TO MEET THE UNDERTAKER! NO EXCEPTIONS! NO EXCEPTIONS! IF YOU DON’T HAVE THOSE TICKETS THEN YOU CAN’T MEET THE UNDERTAKER!” I’ve seen this woman at every show but I have no clue who she is. She can scream, though, let me tell ya.

They had a staffer inside the lobby of the hotel, who would signal to a fellow staffer outside to admit 5 people in at a time, which definitely slowed everything down. Despite the added security, I observed several people sneaking in and cutting the entire line. More power to ‘em.

After we made it inside and received our tickets, we were told that we had to wait on another long line in order to pick up my Undertaker photo op ticket. The line ended near the rear-entrance of the hotel but we only waited for about 20-minutes or so. Jenna waited in line for me for a bit while I checked out the vendor room. I was refunded $40 after the cancellation of Greg Gange.

Fiterman Sports had someone selling $40 “Fast Passes” that would get you to the front of the line for the Autograph and Photo Op sessions. I only had a photo op ticket but seriously considered getting the pass but ultimately decided against it (which was a great call). Fiterman also required you to show a valid ID in order to pick up your ticket. I was photo op ticket #249. 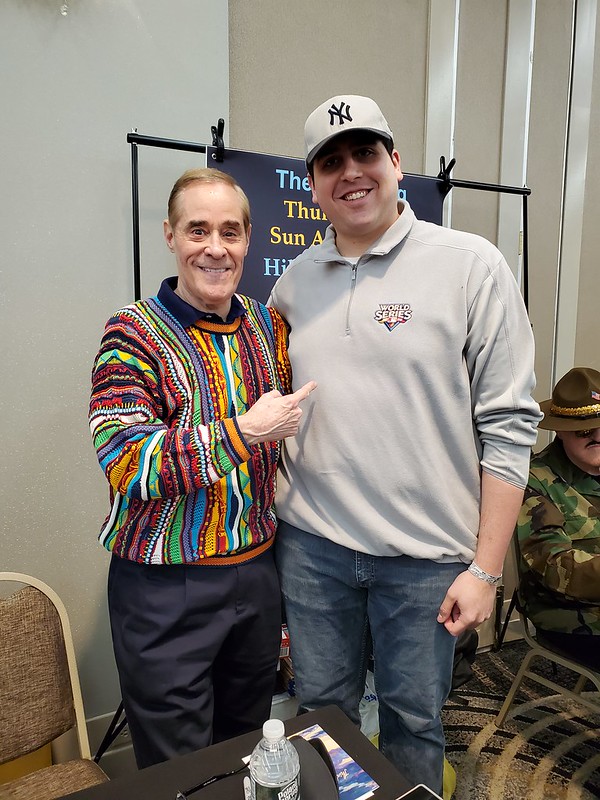 We finally made our way to the vendor room to bang out the pre-orders. Up first – and rocking a killer retro sweater – was Ken Resnick. I debated getting Resnick (and Adnan) here because they’re scheduled to appear at The Gathering in August (which I may attend) but decided to bite the bullet now. Better to be safe than sorry, right? Resnick was incredibly nice and signed his entry in my WWE Encyclopedia, Vol. III. Jenna complimented him on his sweater, which he seemed to get a big kick out of.

It was around this time that I ran into board member Anthony18! Always a pleasure to see him. 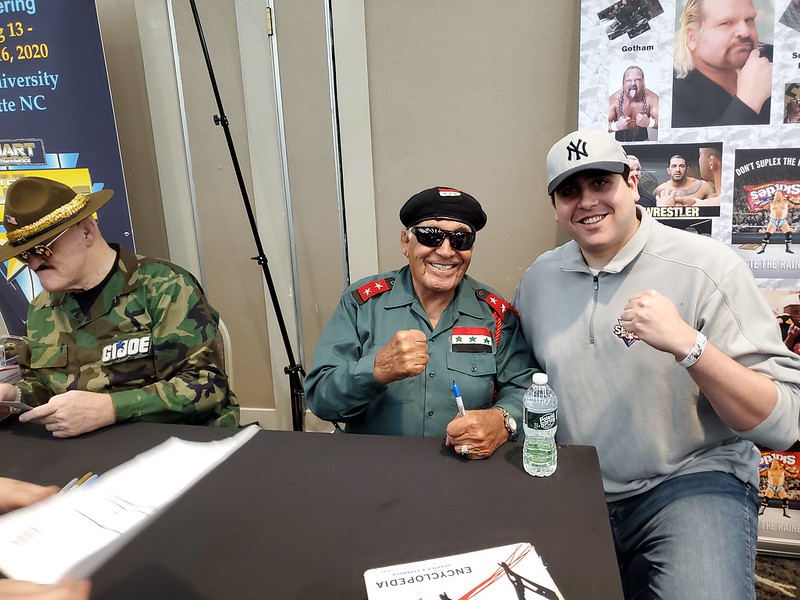 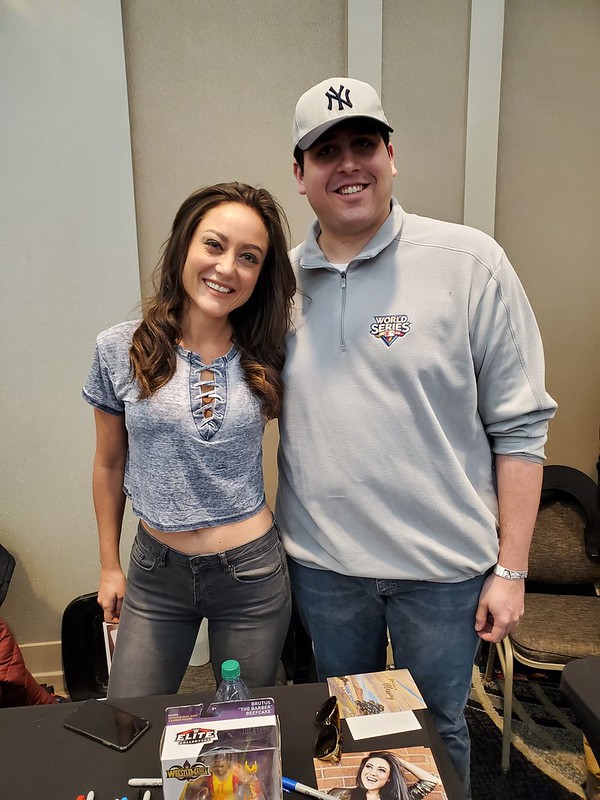 Lauren Mayhew was up next. She was incredibly sweet and asked about how my poor Encyclopedia got so beaten up. She seemed to be genuinely enjoying herself. She signed the Encyclopedia. 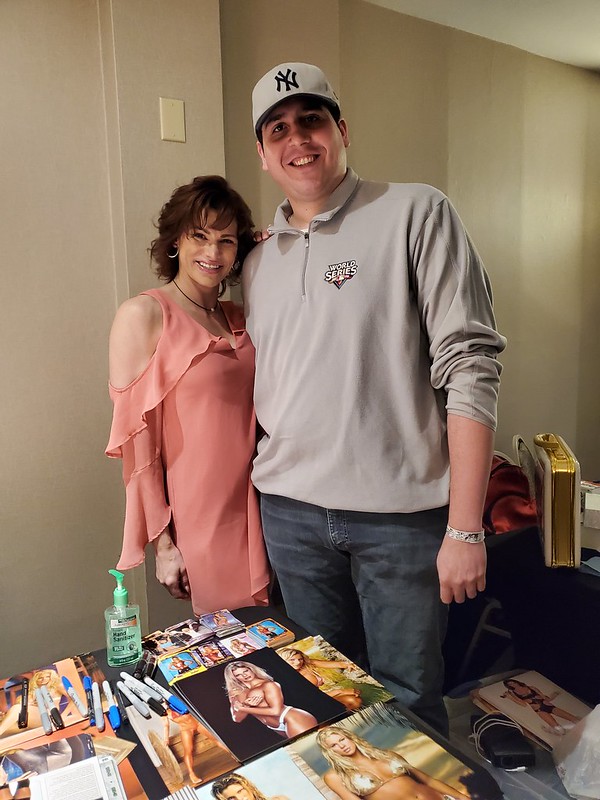 I decided to do a day-of purchase for Jackie Haas, f.k.a. Jackie Gayda, who was towards the back of that small room between the lobby and vendor room. She was originally scheduled to appear at WrestleCon but ultimately canceled. Her combo was $30 and I purchased an additional autograph for $20. She was super nice and engaged everyone in covo. She asked me if I was a big baseball fan and I told her I loved the Yankees. She said she roots for the Indians because she’s from Cleveland though she doesn’t really follow the team. She asked if I wanted her to sign the Encyclopedia as Jackie Gayda and the WrestleMania XX program as Miss Jackie (I did). I scored her autograph in the Encyclopedia and my WrestleMania XX program. 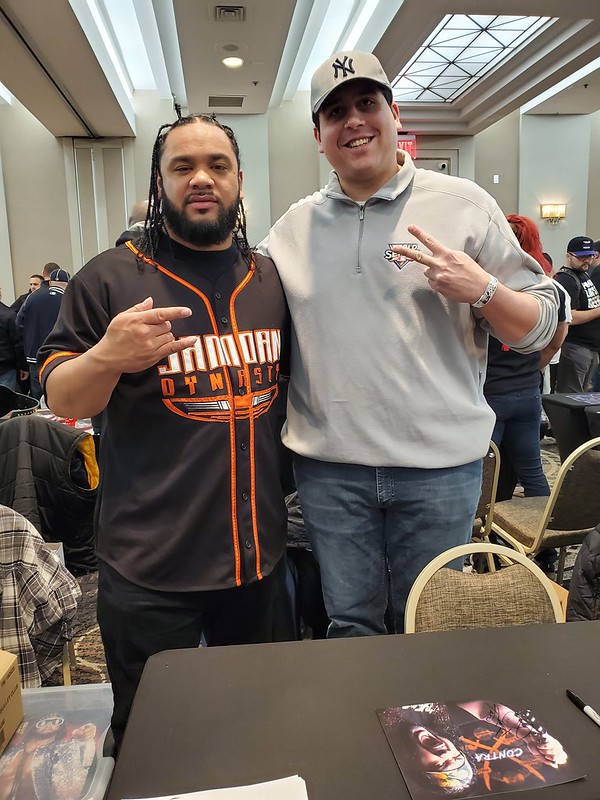 We wandered back in the vendor room to knock out more pre-orders. Jacob Fatu was next and he was also really, really nice. I suspect that Fatu will end up in WWE someday so this was a no-brainer (and I also enjoy him in MLW). He signed an 8×10. 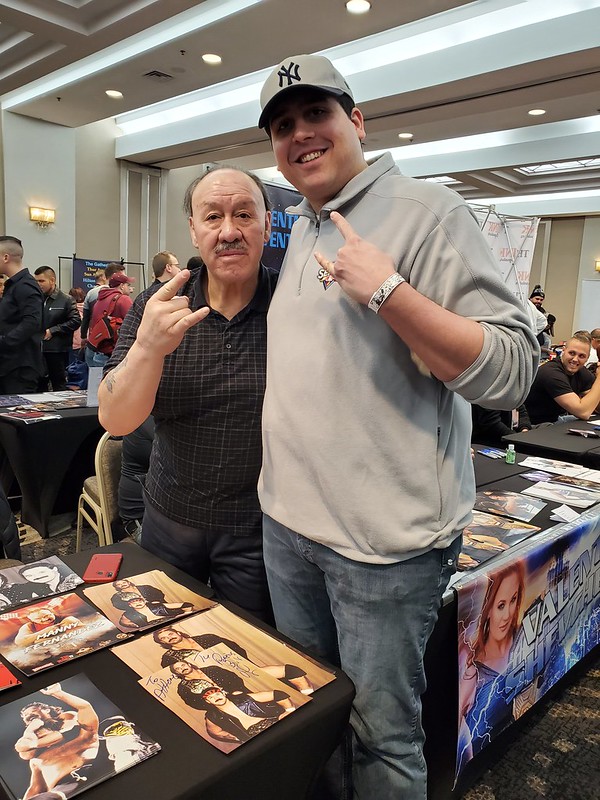 Next was Manny “the Bull” Fernandez. I was pleasantly surprised to see Fernandez because he’s cancelled a bunch of times in the past. Manny was pretty subdued and didn’t seem all that interested in making conversation. He signed an 8×10. 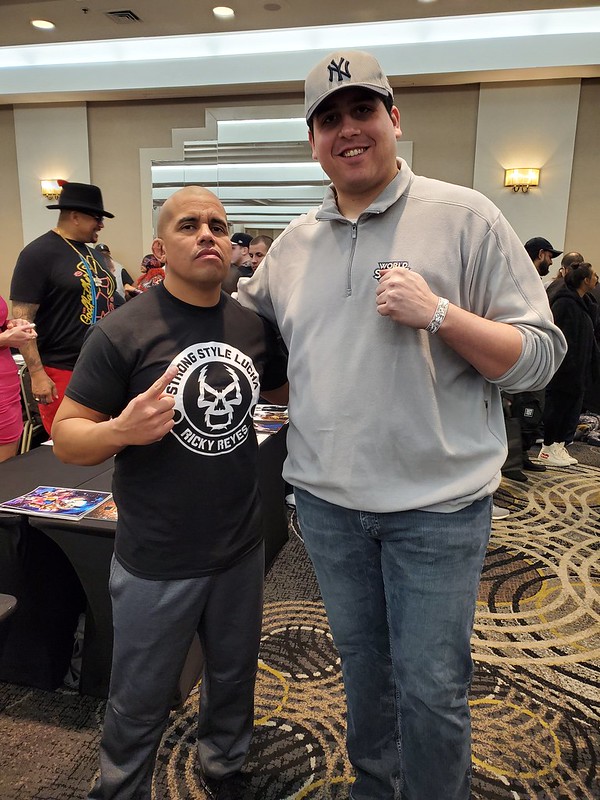 I spotted Castro Cortez, f.k.a. Ricky Reyes, and decided to bite on a $25 combo. Cortez has been around forever and I loved him in Lucha Underground. He was pretty nice and signed a big promo photo (I have a similar one of Brian Cage). 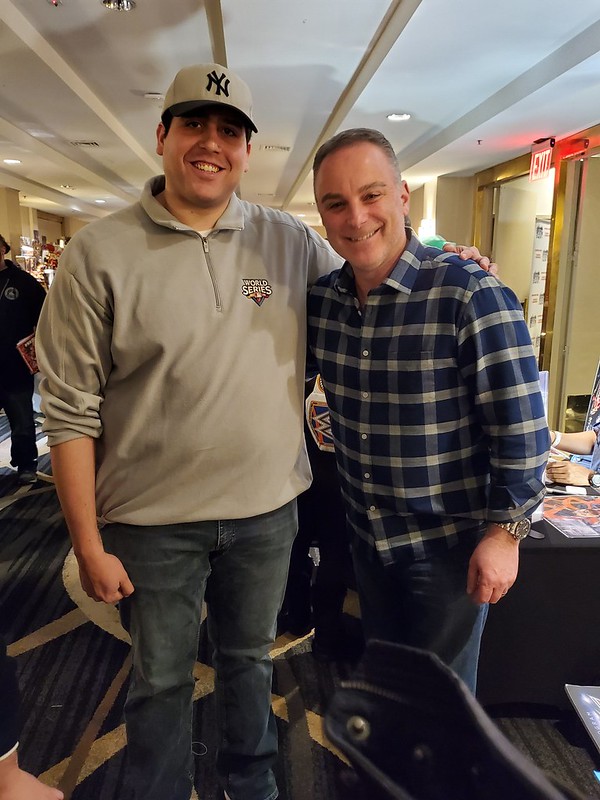 We made our way back to the in-between room to knock out another pre-order: WWE’s Scott Standford. I had pre-ordered the Stanford/Vic Joseph combo but Joseph cancelled, so I decided to get an additional Stanford autograph. Stanford was very nice and engaging and asked me how many signatures I had in the Encyclopedia. I had him sign his entry in the Encyclopedia and my WrestleMania 32/HOF program. 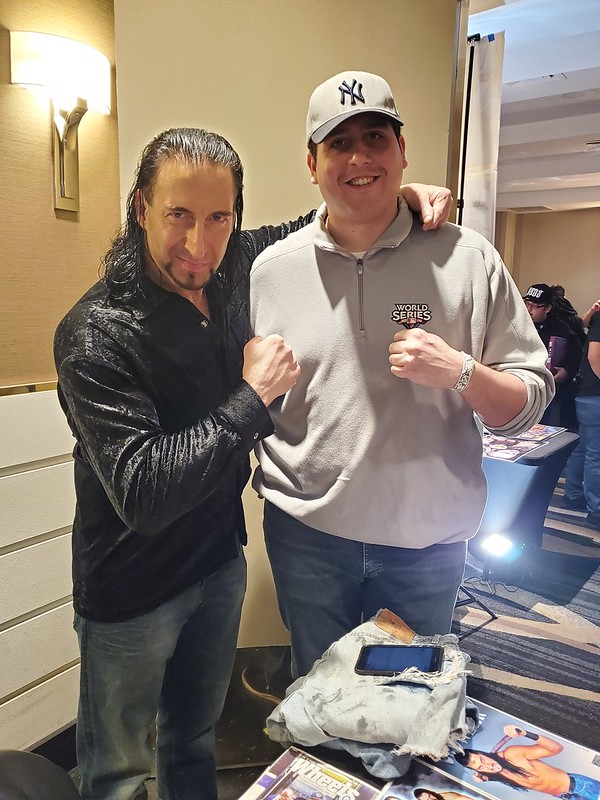 I was done with pre-orders and decided to indulge in other vendor talents. Up first was Crowbar, f.k.a. Devon Storm. He was a tad pricey at $30 for a combo but was very, very nice. I had him sign my WCW Ultimate Guide. 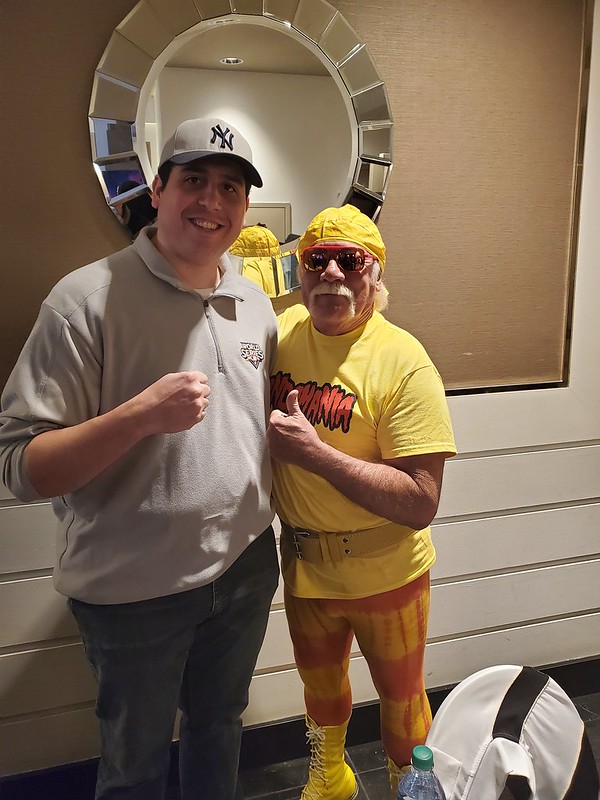 Next was Randy Hogan and, like Crowbar, was $30 for a combo. Randy was dressed in full Hulk Hogan cosplay, which I got a kick out of. He seemed to really enjoy himself, which is always fun to see. He said that I made him feel like he had to stand on a chair for our photo. I had him sign an 8×10. 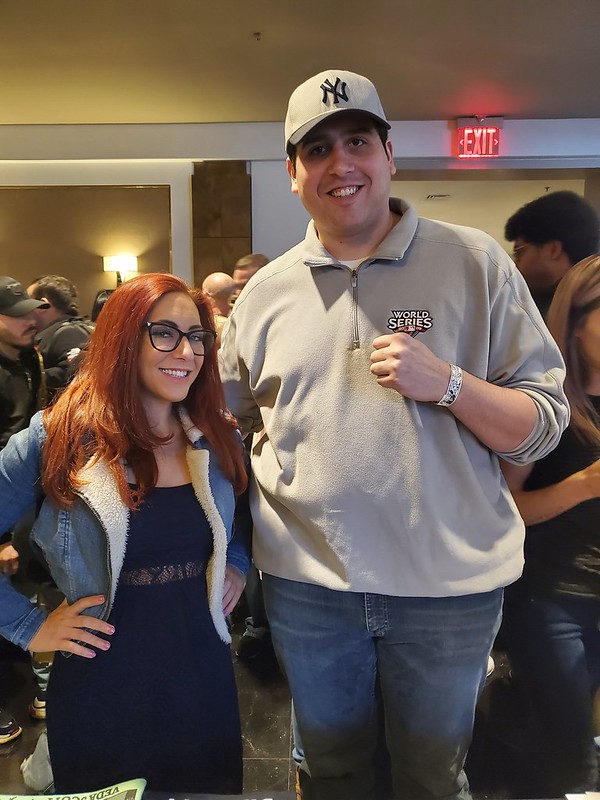 Next was Veda Scott. I’ve always enjoyed Scott in ROH (and on commentary) so I decided to get the $20 combo. She was nice but a little subdued. I had her sign a 8×10.

Jenna and I found a seat in the lobby and decided to camp there until the Undertaker photo ops began. Undertaker was scheduled to do photo ops from 12:30 PM – 1:30 PM followed by autographs and it was now ~11:25 AM. I caught up with the two Garys, who were a pleasure to speak to. We were near Ira and Jenn, too. Greg also came over and we exchanged hellos.

When I came back, another fan was trying to figure out when he could get the Badd Company/Orient Express dual photo op. It sounded like those were over and Paul Diamond was going to remain in the Max Moon costume for the duration of the convention. I know that Badd Company had been seated together earlier in the day. 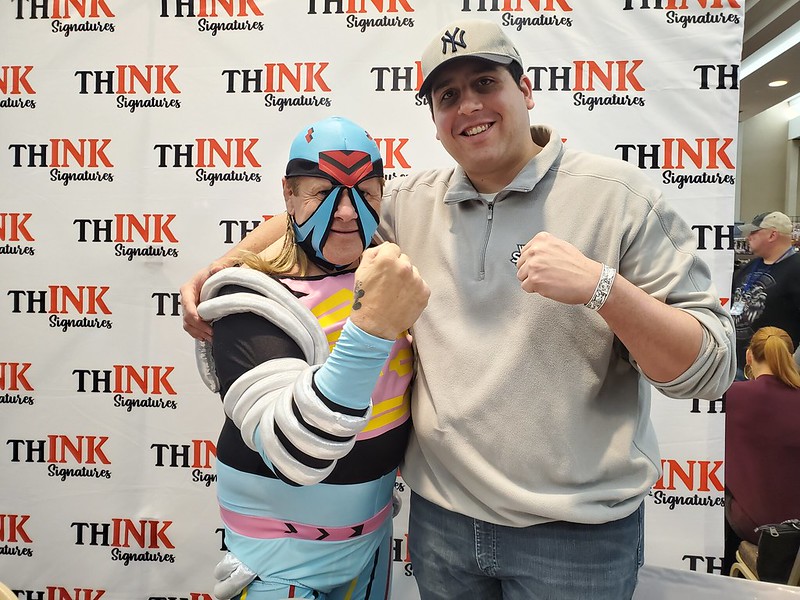 Anyways, Diamond looked great as Max Moon and the combo was only $25. What a great idea for a photo op.

I made my way back to the lobby and it was now ~11:35 AM, still about an hour before ‘Taker was scheduled to do ops. We just hung back and ate (I had a pretzel and Jenna had the sliders). Fiterman eventually announced that VIPs were going first (I still don’t know what they meant by VIPs since Fiterman only sold individual autographs and photo ops). They were doing their best to clear the lobby but literally, no one listened and just stood there. Here’s a pic: 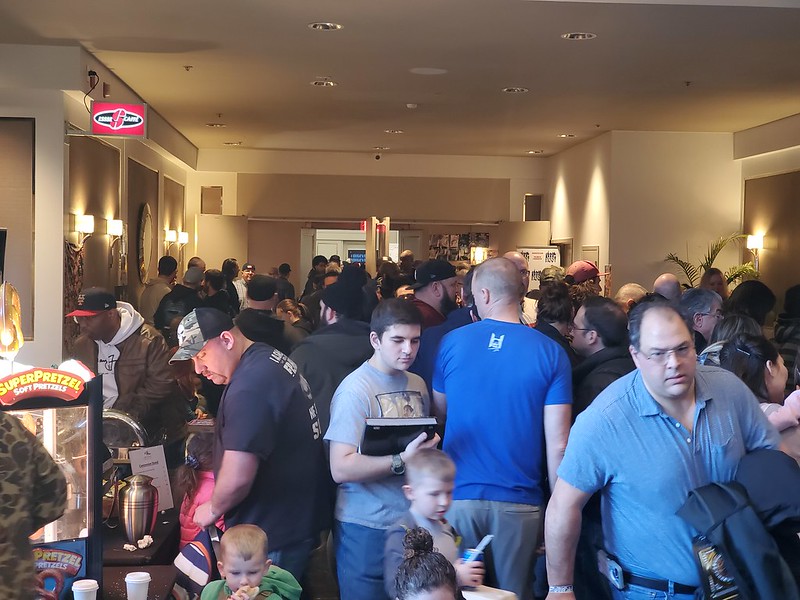 And here’s a pic of someone trying to get a photo op with Ezekiel Jackson: 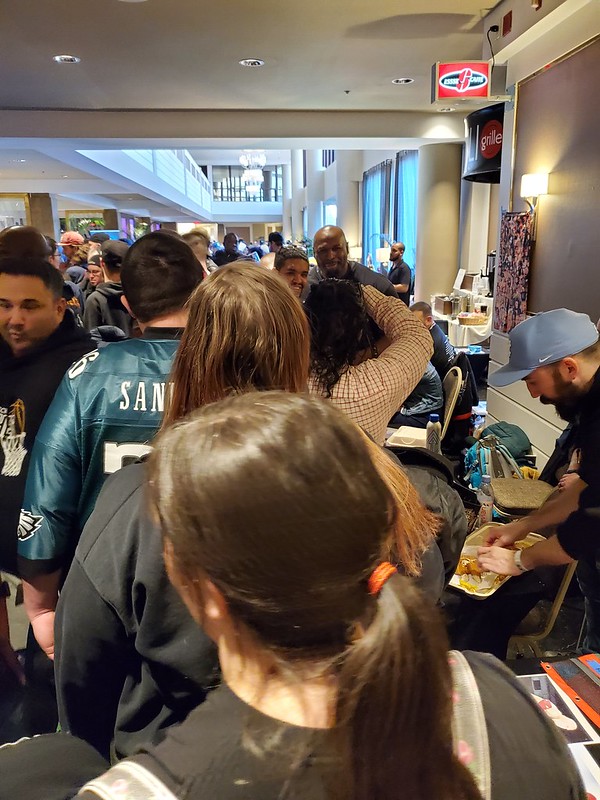 It was now ~12:15 PM and I decided to use the bathroom. Instead of fighting my way through the mass of humanity, I went around them. I went down the corridor, where a group of people were waiting outside of the auditorium (where Undertaker was stationed). I was about to open the door to the bathroom when someone from Fiterman screamed, “LISTEN UP! WE ARE ABOUT TO DO UNDERTAKER PHOTO OPS ONLY!” No way! I allowed the line of people to go and there was a big break in the line, so I just hopped on and BOOM I was in! 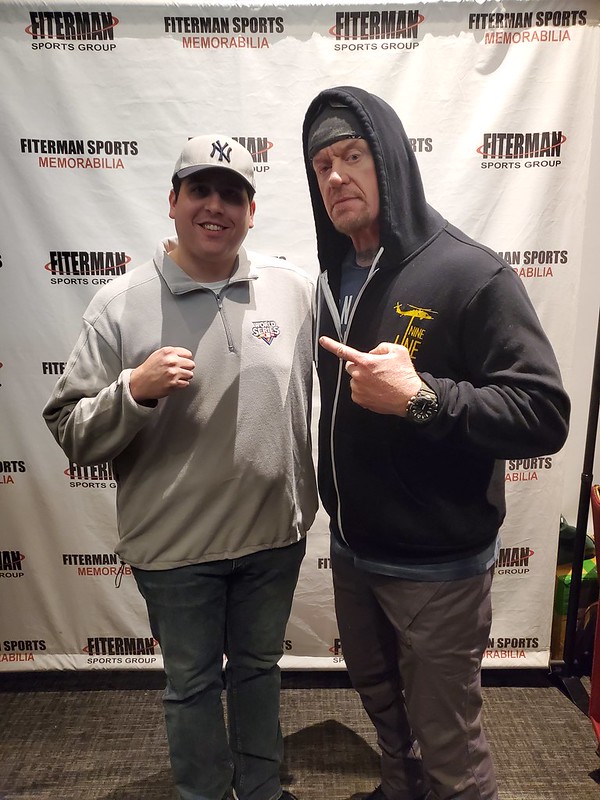 I called Jenna to let her know that I was in the room. Thankfully, it was a well-oiled machine inside the room. They had staff on hand to hold your coat/bags, one to grab your phone, who then handed it to the “photographer.” I tried snapping a pic of ‘Taker but was gently told not to. UNDERTAKER (!!!) was super cool and seemed to be in great spirits. Meeting him was one of the coolest experiences I’ve ever had in this hobby. What an awesome moment.

And that was that! We were done by 12:25 PM. I hope you enjoy my long read (or just looked at my photos! That works too). I would’ve liked to have gotten Little Booygeyman but oh well. There’s always next time. 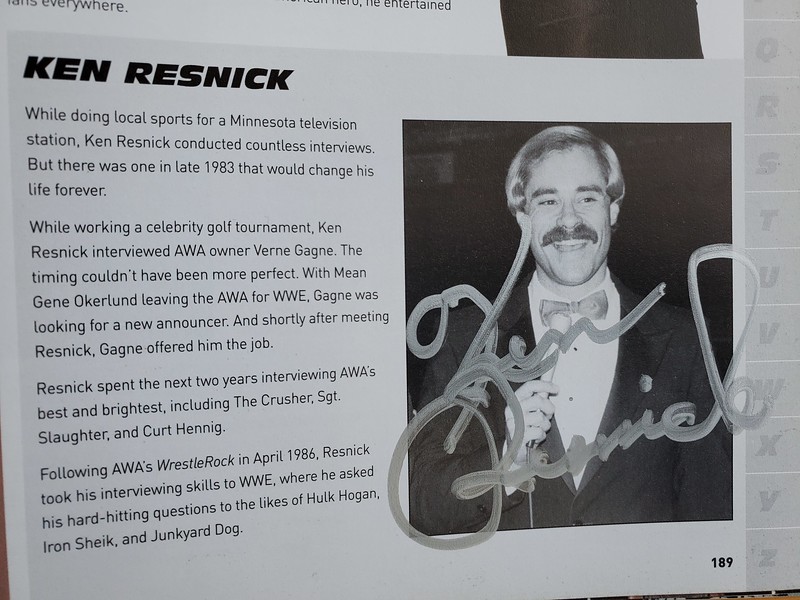 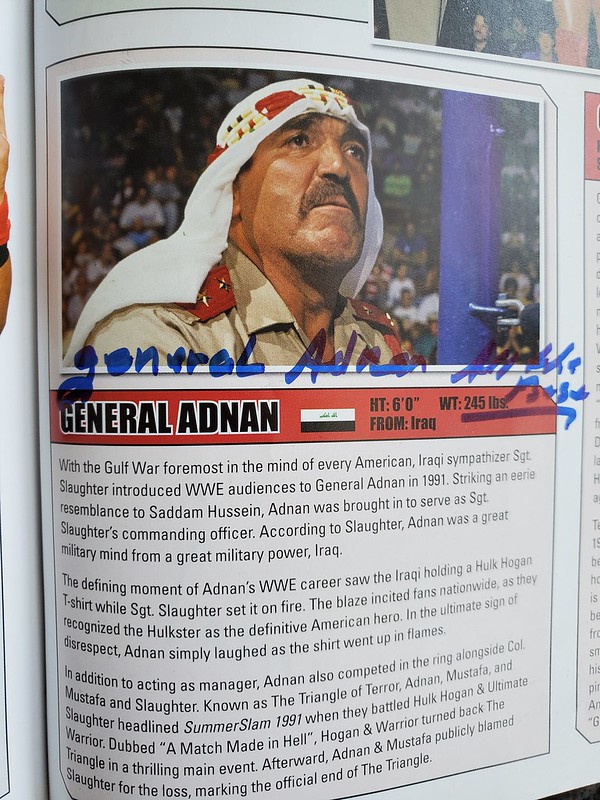 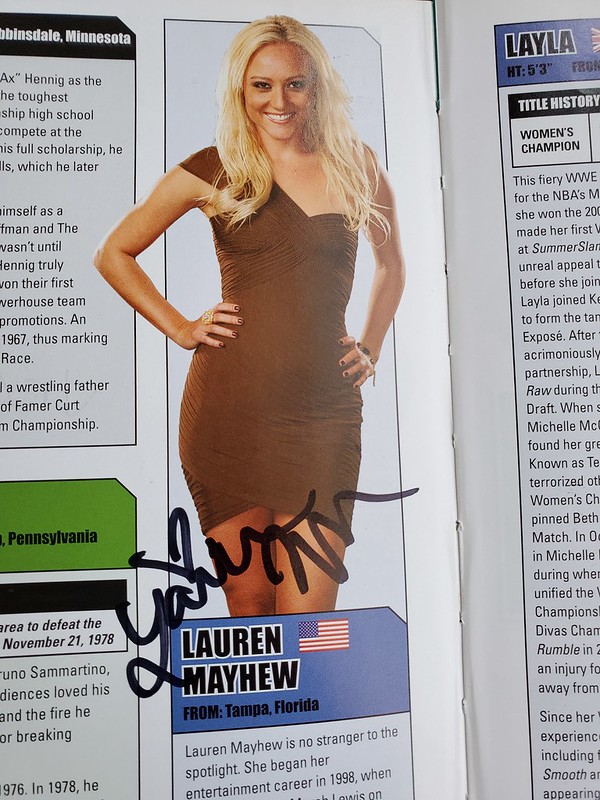 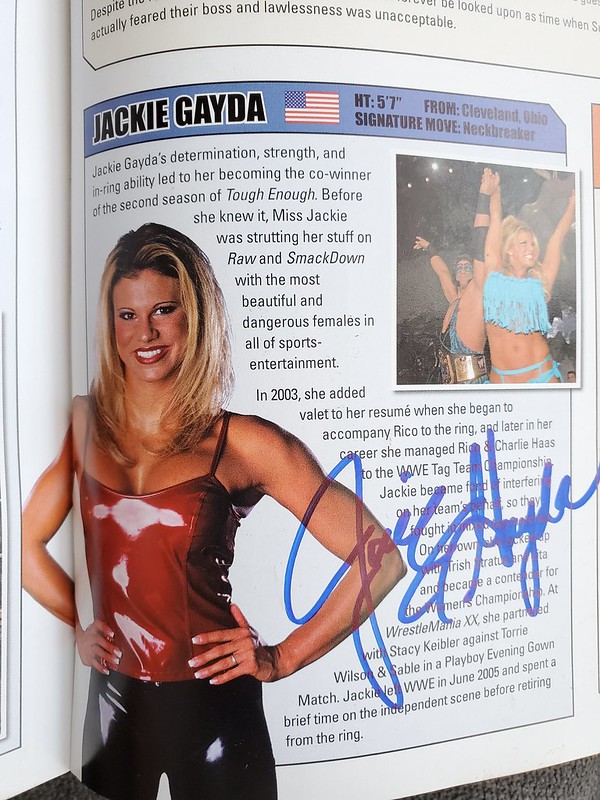 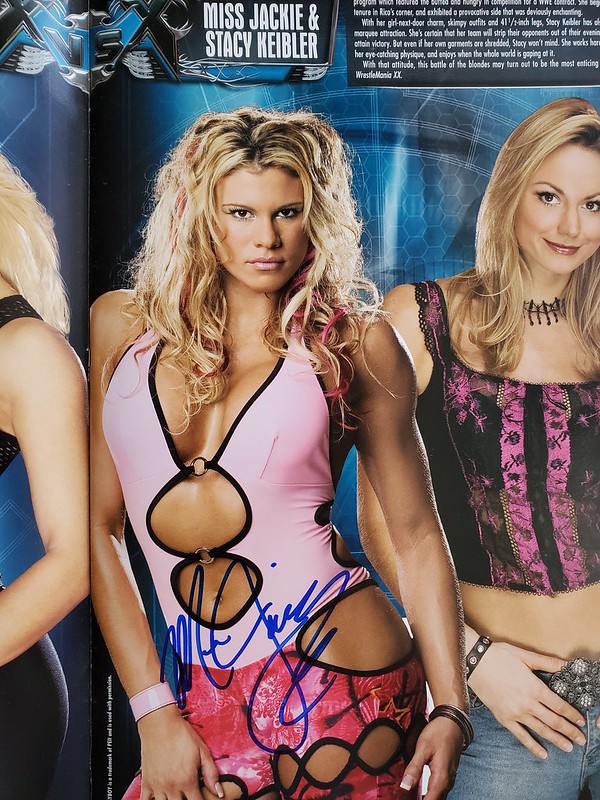 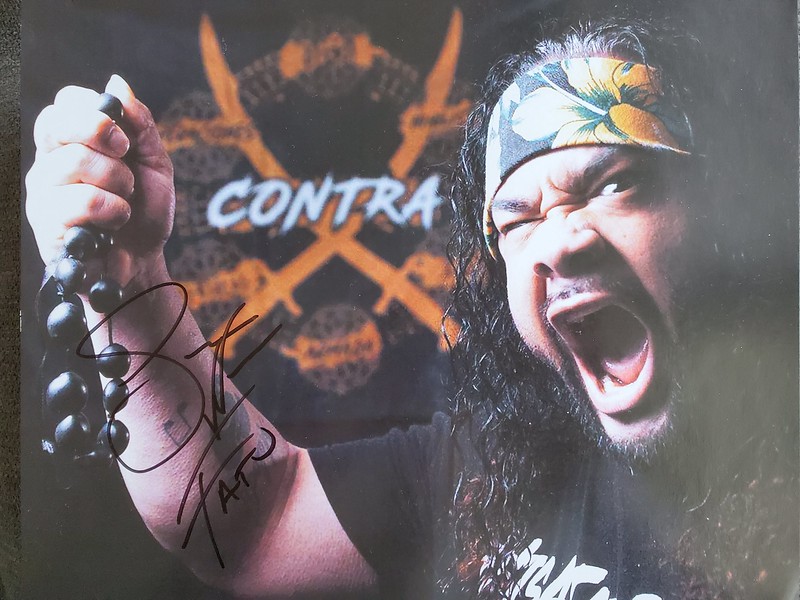 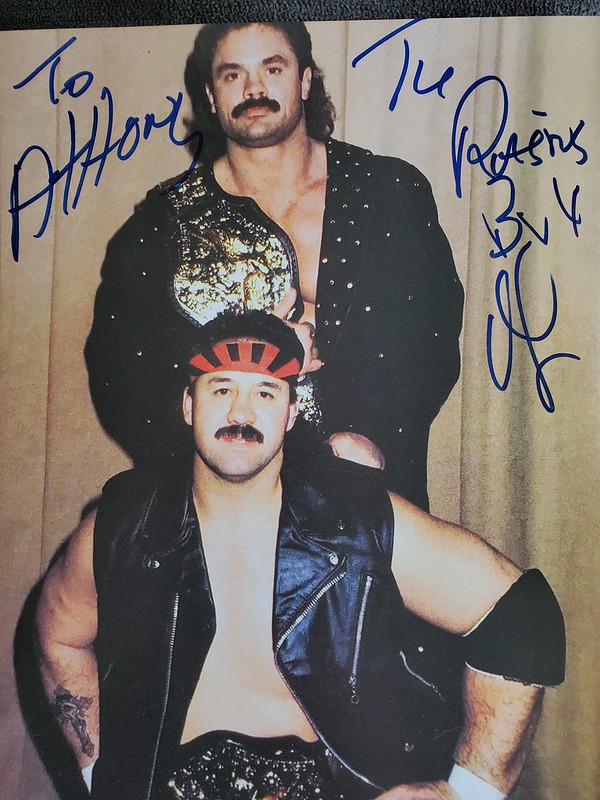 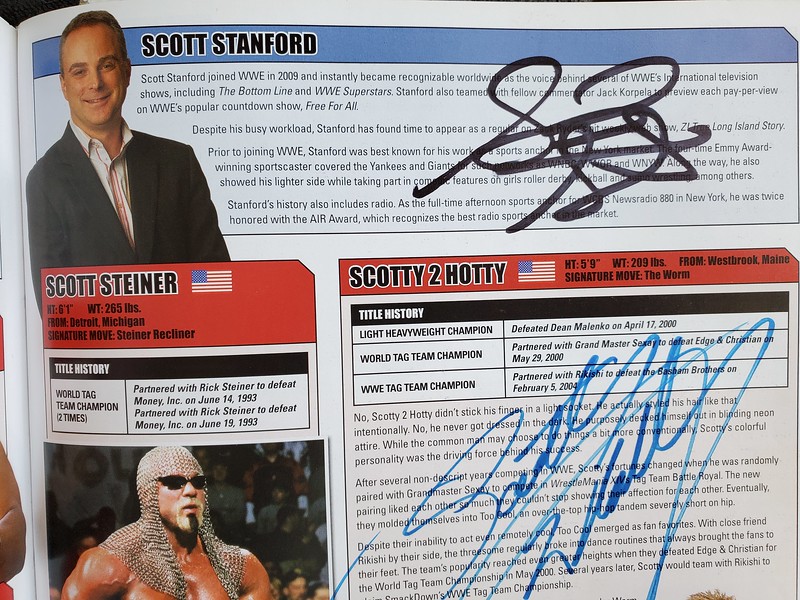 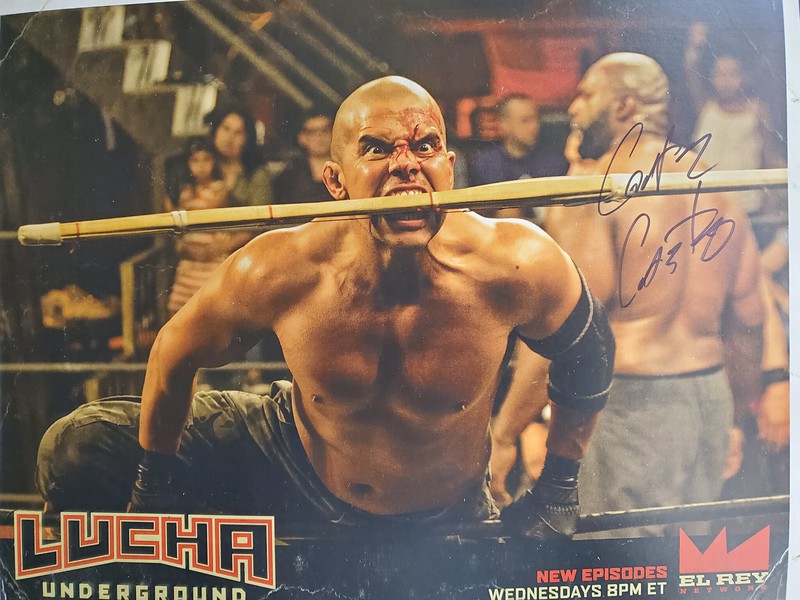 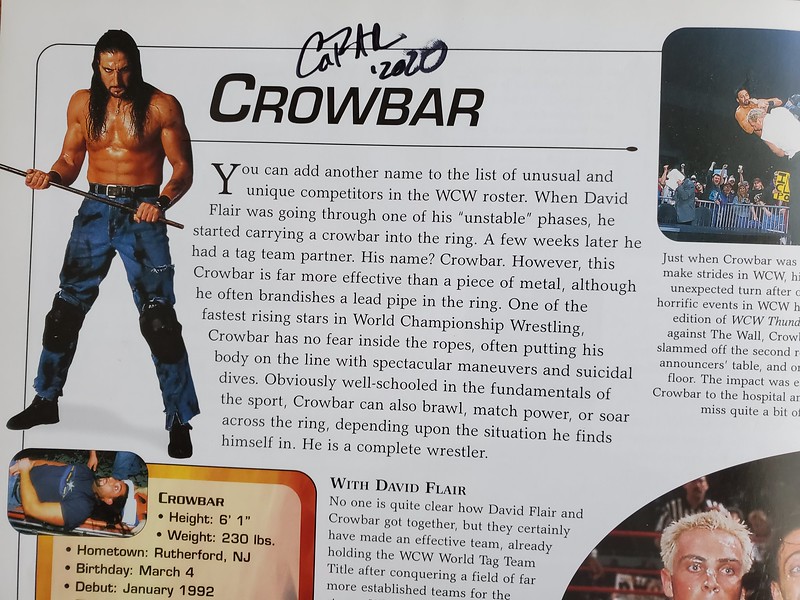 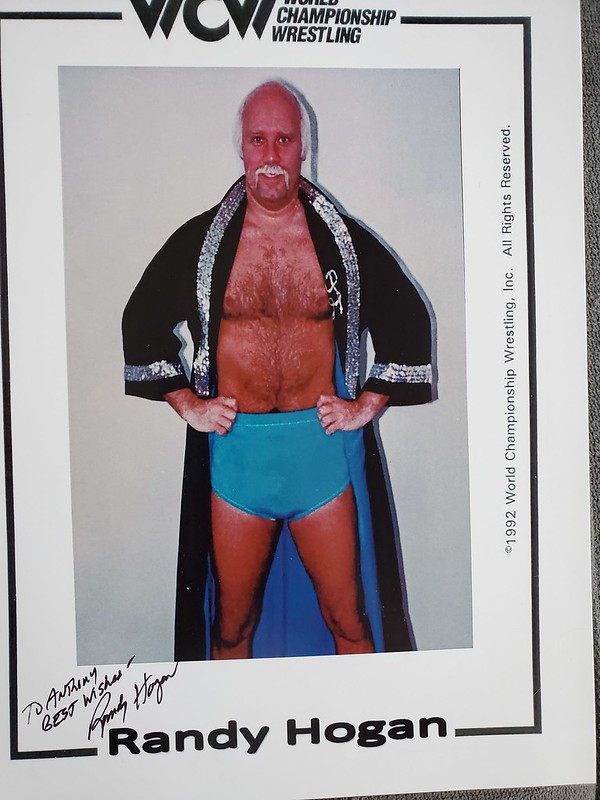 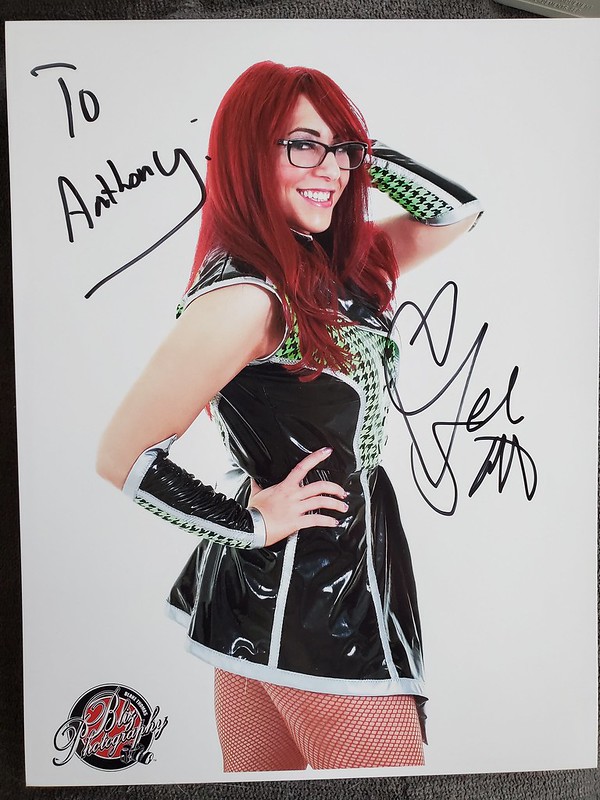 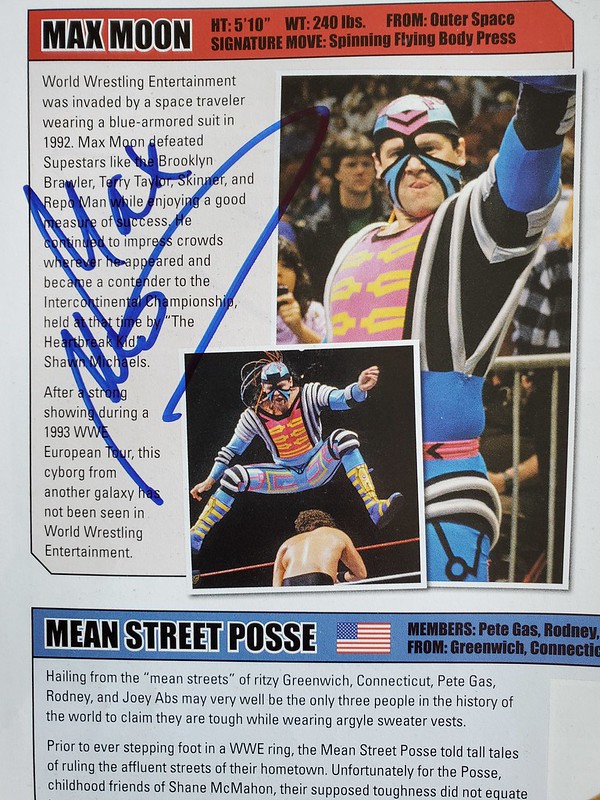